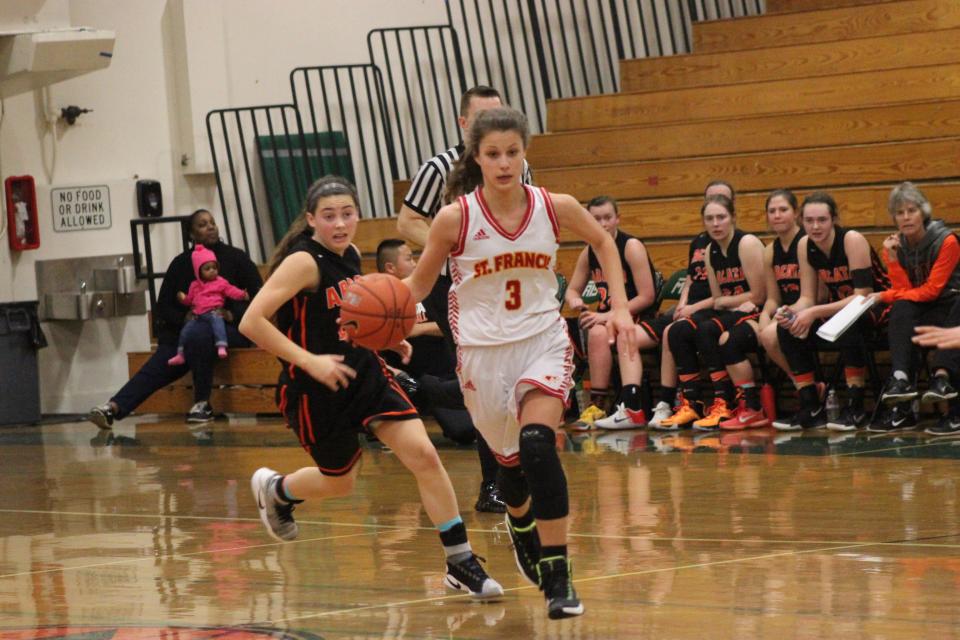 OLINDA, Calif. – St. Francis lost to Miramonte 63-53 in the semifinals of the Diamond bracket at the West Coast Jamboree Thursday. The Troubadours will play Elk Grove in the third-place game at 4:30 p.m. on Thursday. 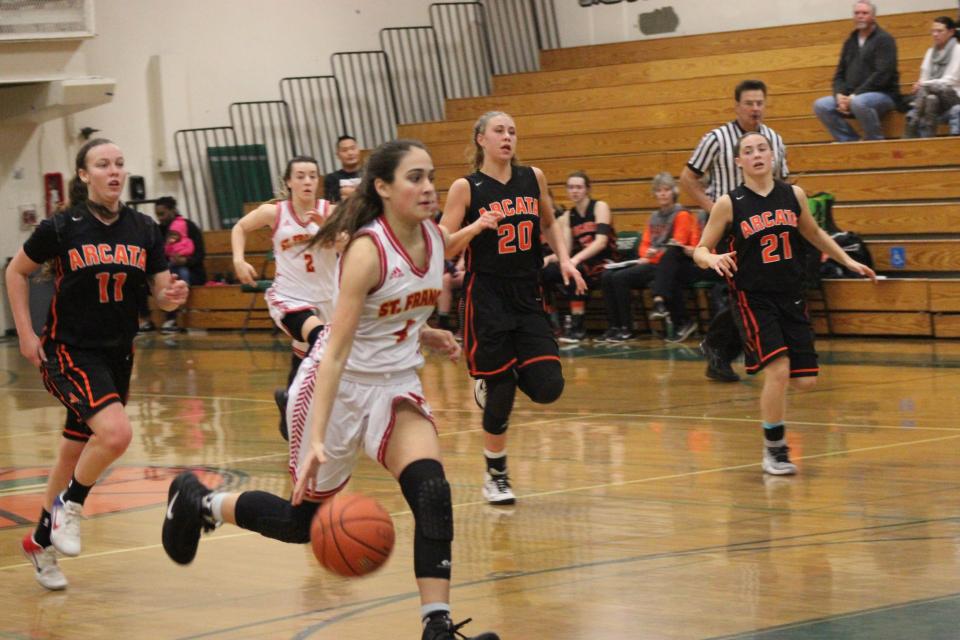 ORINDA, Calif. – Sophomore Jackie Koerwitz sent the game to overtime and sophomore Nika Bagatelos hit two threes in the extra period to propel St. Francis to a 69-66 win over Arcata in their opening game of the Diamond bracket of the West Coast Jamboree.

“We were planning on Julia making the shot but I just got (the rebound) and was able to put it in to tie it up,” said Koerwtiz.

Koerwitz, who finished with a career-high 20 points, capped her big night with a buzzer-beating put back to give the Troubadours a chance in overtime to cap the comeback effort. 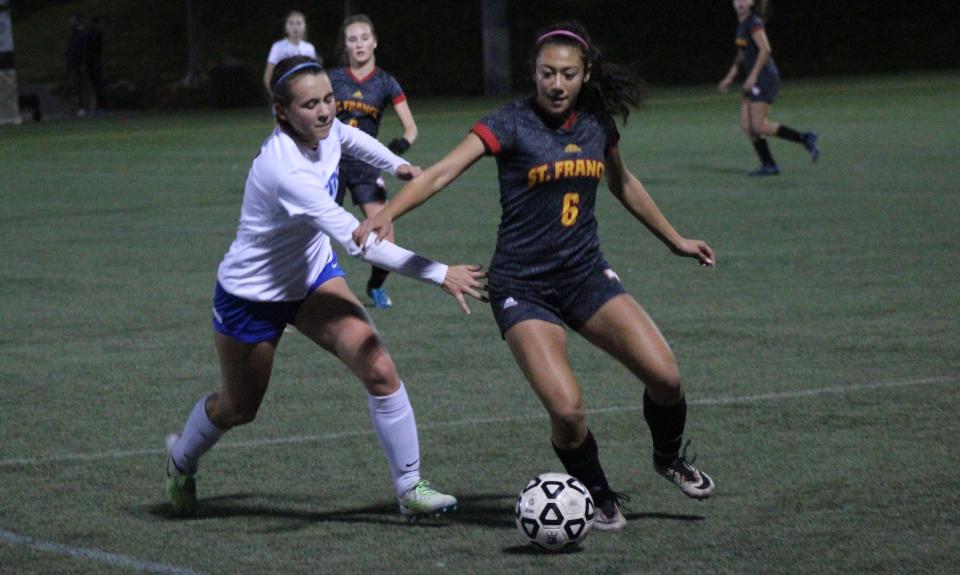 “The last two games – Foothill and El Camino Real – were fantastic opponents,” said Head Coach Maryclaire Robinson. “These last two games were a great test for us. It was team defense, we battled and we had to play faster. There is no doubt in my mind we are better this evening than this morning when we got here.” 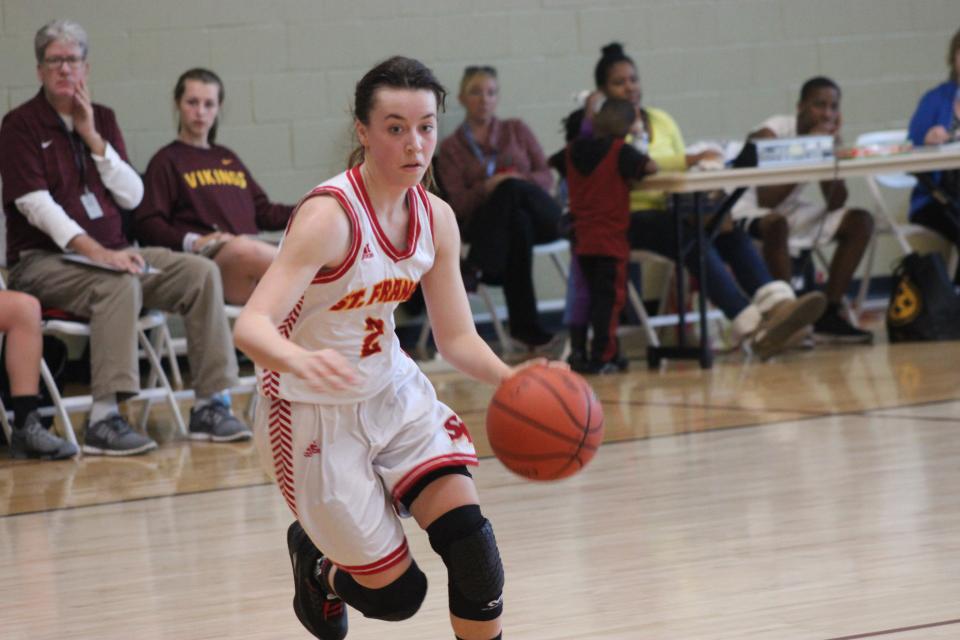 PHOENIX, Ariz. – Sophomore Lauren Pank scored a career-high 16 points in her second varsity start but it was not enough as St. Francis lost 54-40 to Forest Grove (Ore.).

“It was really fun,” said Pank after the game about contributing. “I am glad I got to help my team out a little bit. Hopefully, I can do more of that in the season.”

She scored 16 points, totaling her season output from the first six games. Pannk hit three three-pointers and went 5-for-6 at the line. 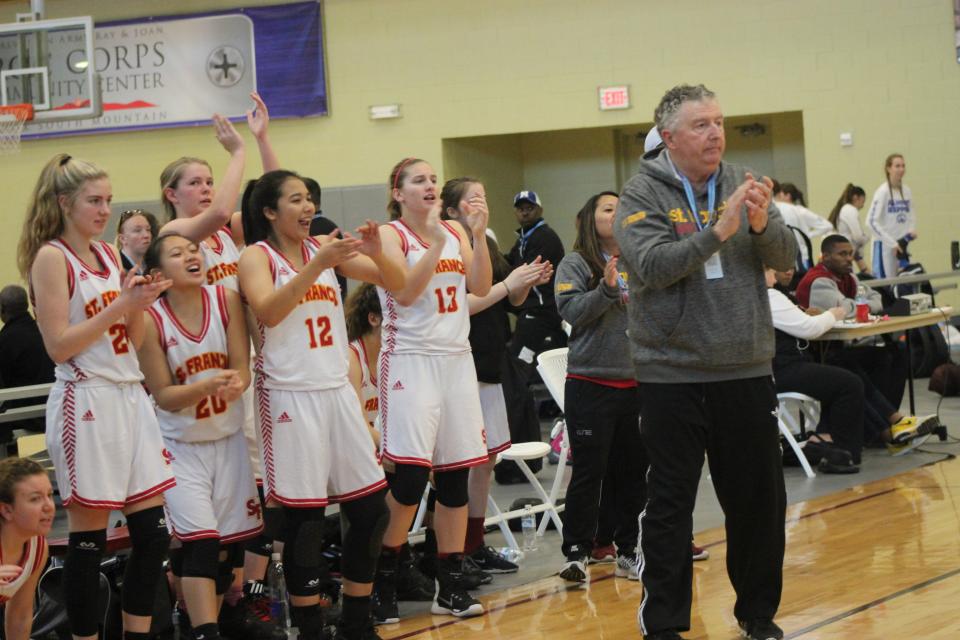 PHOENIX, Ariz. – The St. Francis basketball team fell behind by 14 points in the second half only to pull within a basket before falling 53-50 to Gilbert (Ariz.) Wednesday on the third day of the Nike Tournament of Champions.

Sophomores Nika Bagatelos and Megan Austin combined for 18 points in the fourth quarter as the Troubadours almost came back in a game that looked over entering the final period.

“We started to play good defense and get in the passing lanes and that helped our offense get going and score some points,” said Bagatelos. 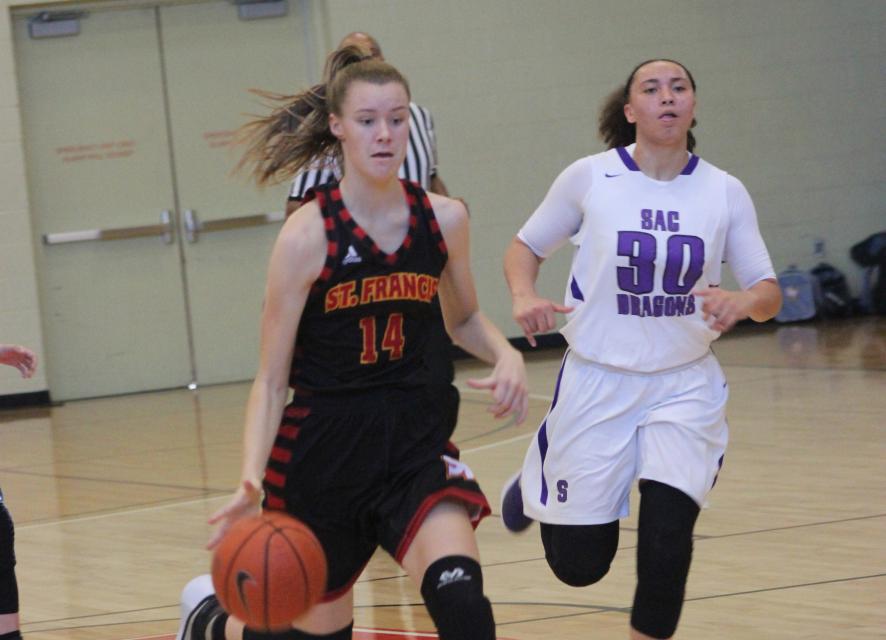 SACRAMENTO, Calif. – Just 3.1 miles apart in Sacramento, St. Francis and Sac High met 634 miles away in Phoenix Tuesday in the second round of the Nike Tournament of Champions with the Dragons winning 54-36.

“We did not match their physicality in the first half and their quickness got to us,” said Head Coach Vic Pitton. “There was a part of the game in the second quarter where we played pretty good. Certainly in the second half we picked it up but offensively we hit just two threes and we have to hit more threes than that.” 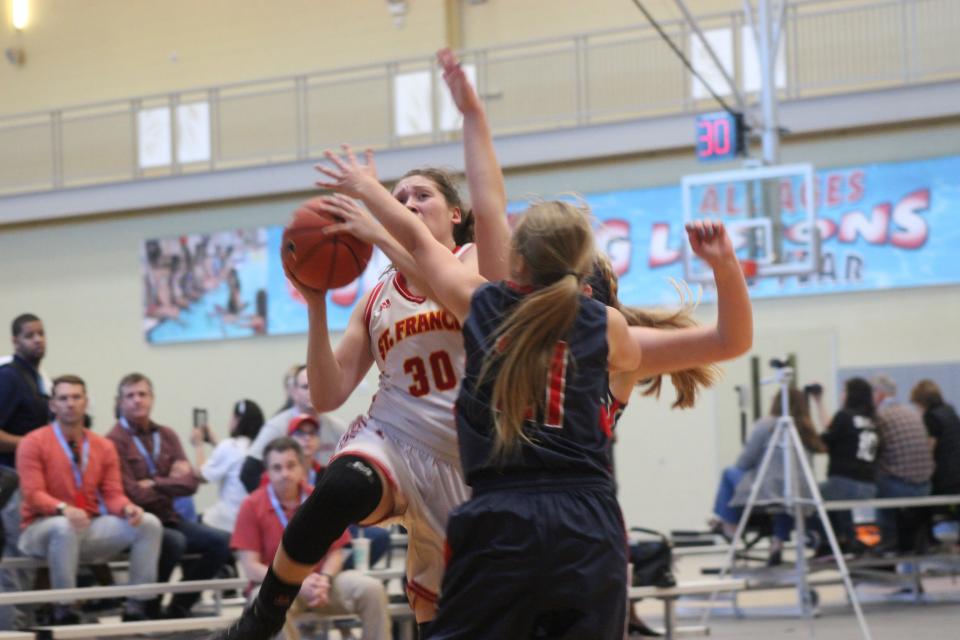 PHOENIX, Ariz. – Senior Julia Razo scored a team-best 15 points to help St. Francis to a 51-47 opening round win at the 2016 Nike Tournament of Champions over Chapparal (Colo.) Monday.

St. Francis trailed by seven points in the early minutes of the fourth quarter 42-35 but rallied with an 11-0 run sparked by Razo, who scored six of 15 points in the quarter. Senior Janae Fairbrook added seven points including a big three-pointer during the rally. 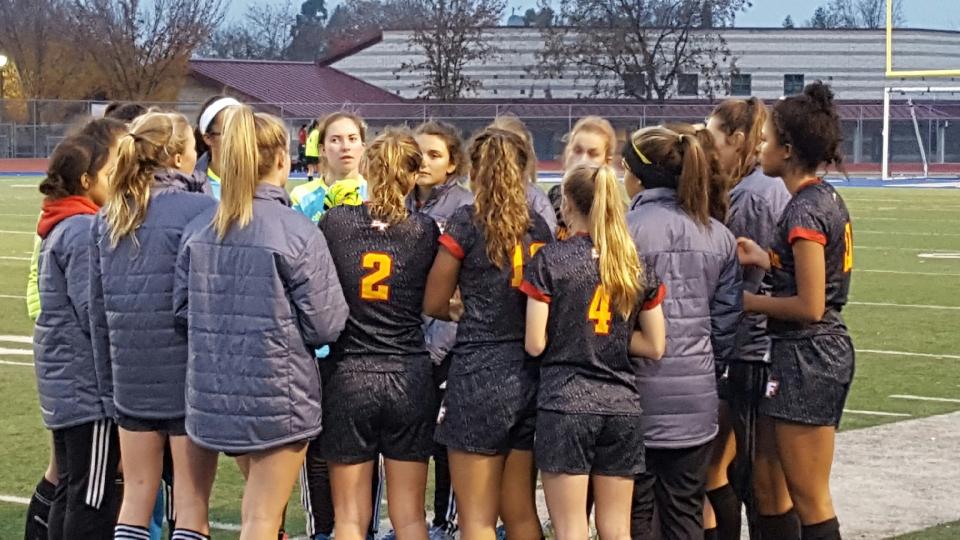 ROCKLIN, Calif. – Sophomore Janae DeFazio scored a late goal for the second consecutive game to salvage a tie at Rocklin on Tuesday night. DeFazio scored her fourth goal of the season in the 89th minute off a rebound off the cross bar. The ball was initially served by A.J. Tanner.

Rocklin’s Madeline Morrison gave the Thunder the lead in the 34th minute.

Basketball Travels to Arizona for Nike Tournament of Champions 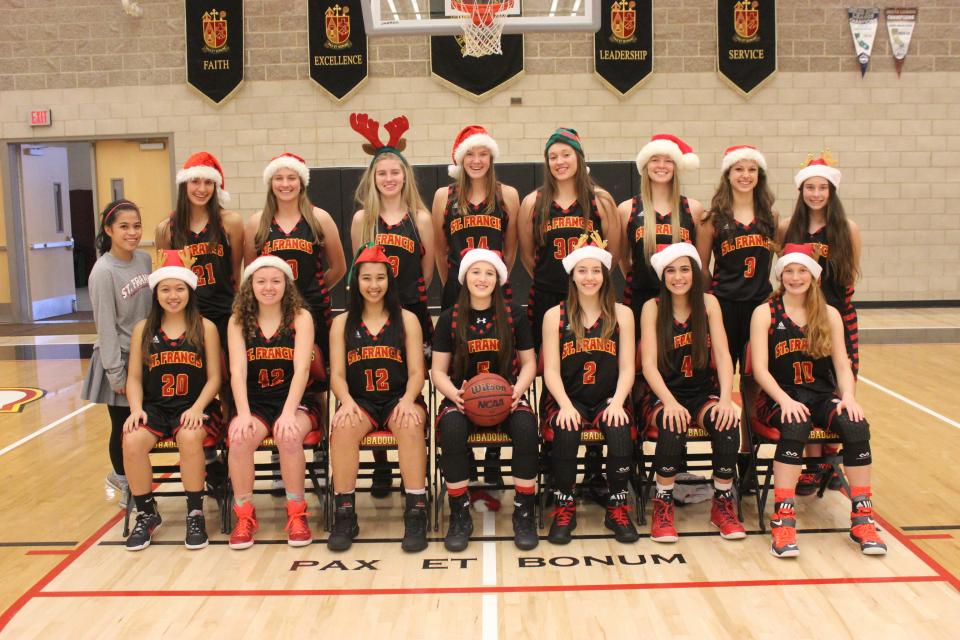 PHOENIX, Ariz. – The St. Francis varsity basketball team will open the 20th Annual Nike Tournament of Champions in Phoenix against Chapparal (Colo.) at 12:30 p.m. on Monday, Dec 19 at the Salvation Army KROC Center.

“I am really excited for the basketball aspect of the trip,” said junior guard Marlee Nicolos. “There is a lot of really good competition so we should grow as a team there. It is also a really big bonding experience for all of us. We get a lot closer after Arizona so I am looking forward to that.” Wright led St. Francis to the CIF Northern California Regional semifinals before the Troubadours lost to eventual CIF Division II state champion Valley Christian. The sixth-seeded Troubadours upset No. 3 seed Whitney in the quarterfinals to advance after defeating No. 11 Windsor in the opening round. 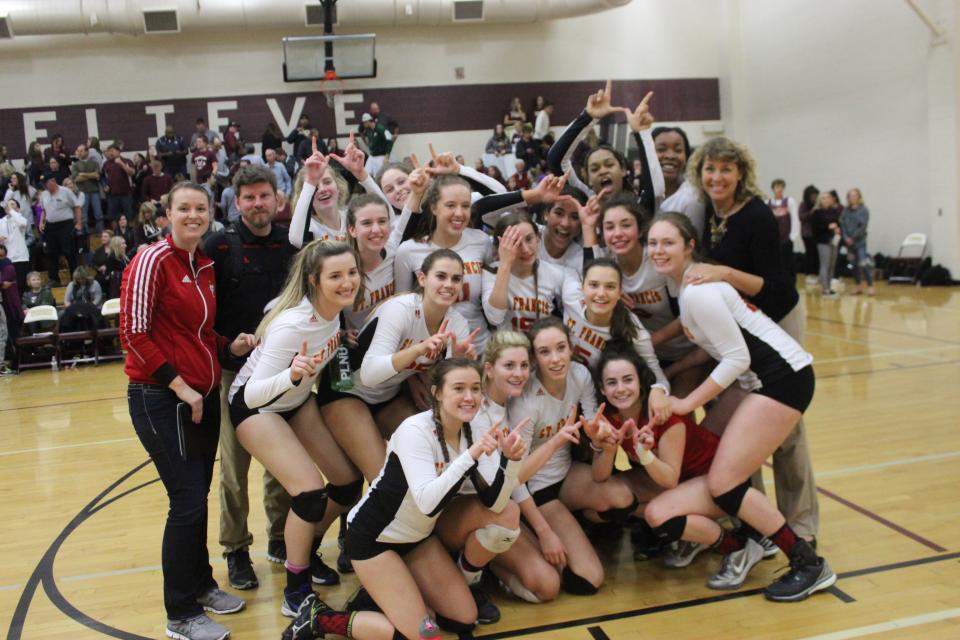 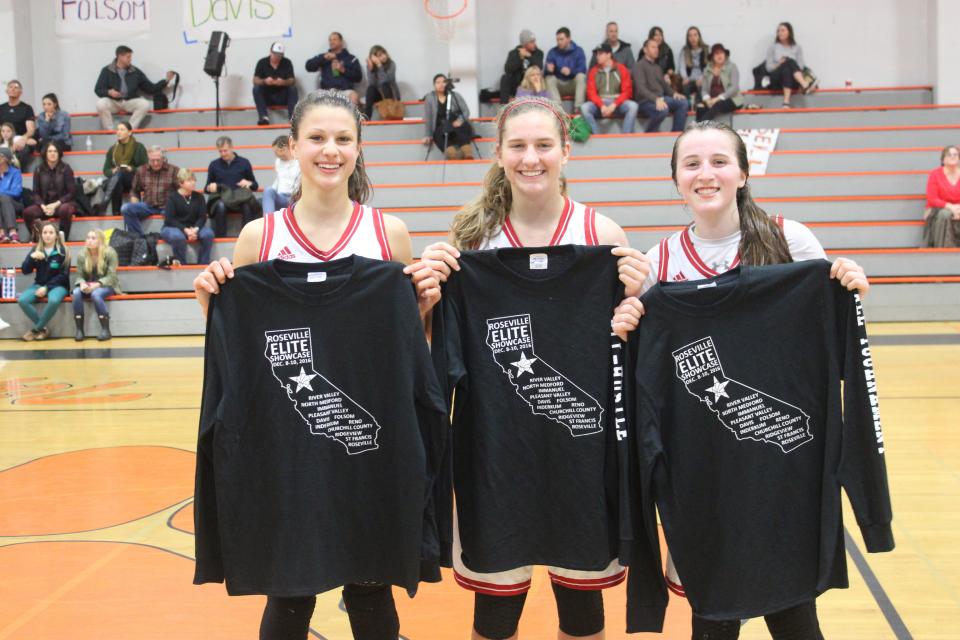 ROSEVILLE, Calif. – Down by seven heading into the final quarter, Head Coach Vic Pitton challenged his senior point guard. And she answered.

Senior Janae Fairbook scored 14 of her game-high 22 points in the final quarter to help St. Francis erase the deficit and post a 77-69 victory over Delta League rival Davis in the third-place game of the Roseville Elite Showcase. 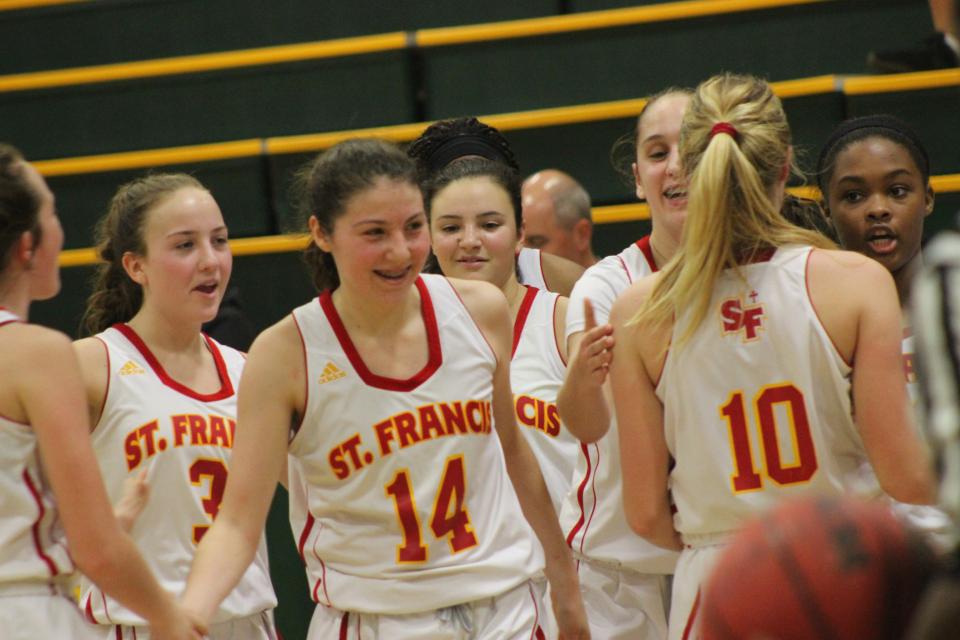 SACRAMENTO, Calif. – Sophomore Krysta Alvarez had a game- and season-high 19 points to lead St. Francis to a 50-46 win over Del Oro to capture the Robby Nakamura Holiday Classic at Kennedy High School.

“It feels very good especially with a new team and our chemistry is definitely growing,” said Alvarez, who notched double digits for the first time this season. “It is nice to win and know we can work together well.” 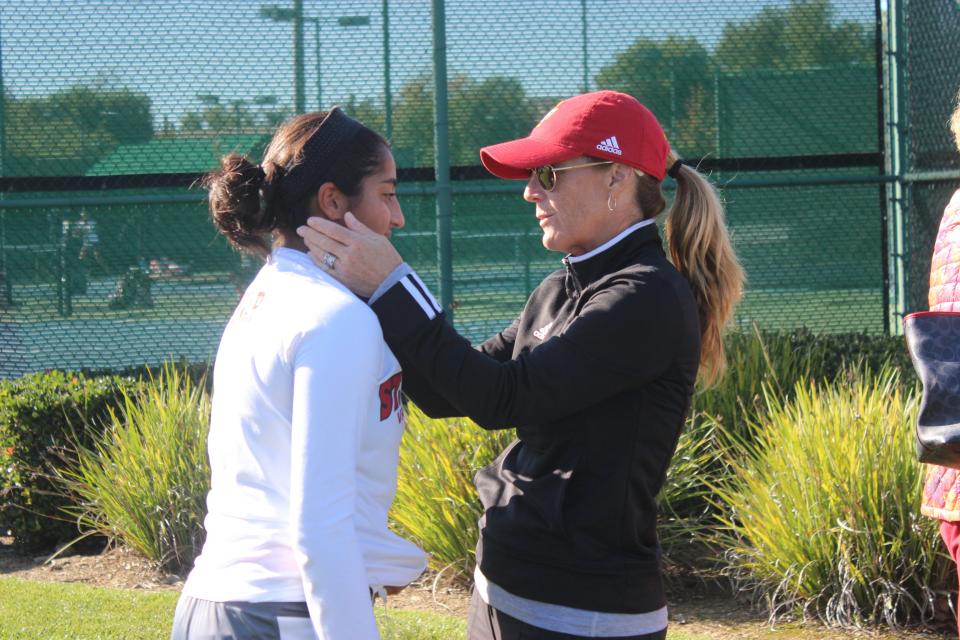 SACRAMENTO, Calif. – St. Francis tennis coach Kristi Spector was named the Delta League Coach of the Year. She led the Troubadours to the quarterfinals of the CIF/USTA Northern California Regional Tennis Championships and the Delta League championship.

The Troubadour tennis team also advanced to the Sac-Joaquin Section finals before losing to Oak Ridge, finishing with an 18-3 record on the season and posting a perfect undefeated 12-0 mark in Delta League play. It was the second consecutive league title for the Troubadours and first NorCal appearance since 2011. 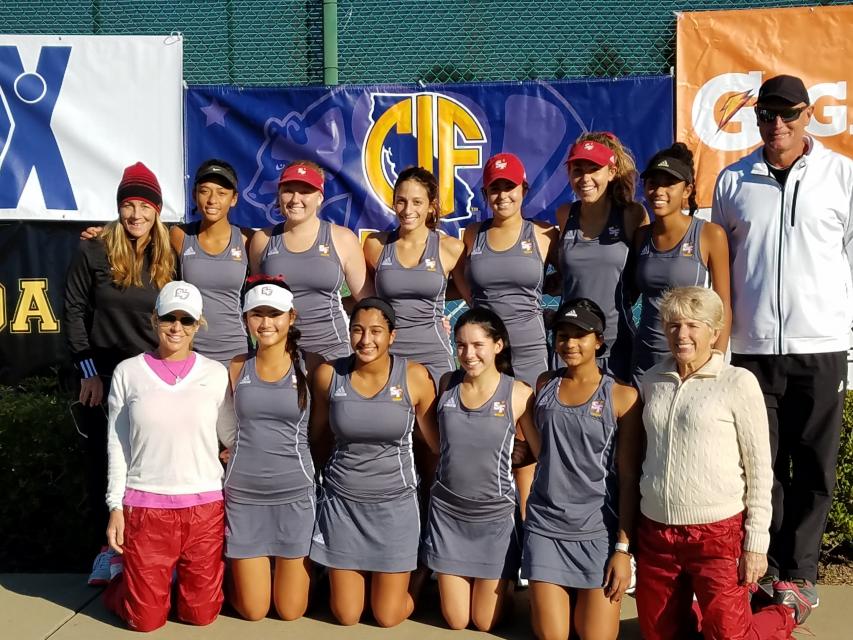 Christian Brothers (5-1) scored early to take the lead in the contest and added a second goal early in the second half. Sophomore A.J. Tanner  got the Troubadours back in the game with a strong second half, scoring twice to tie the score. 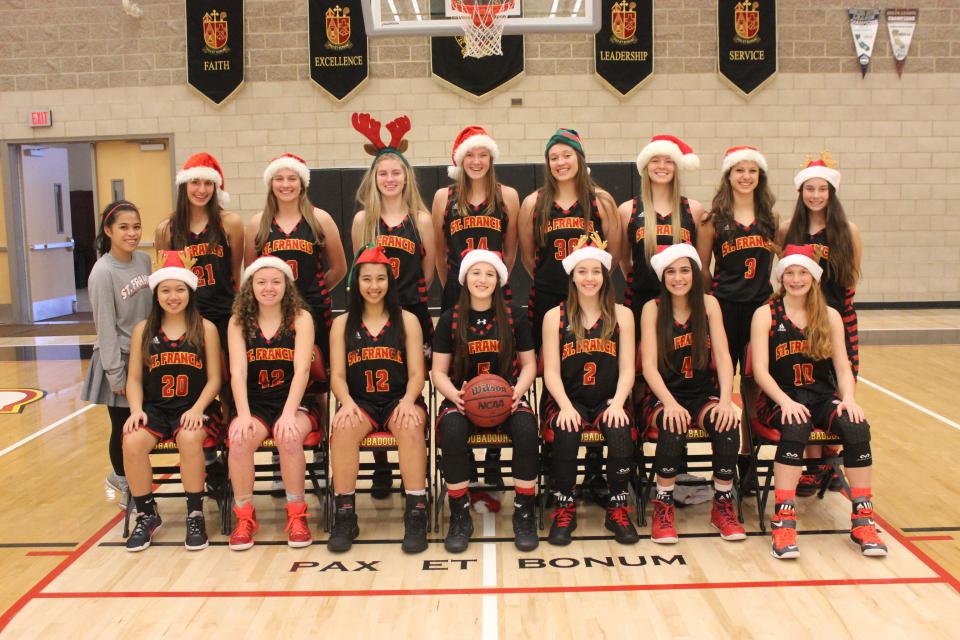 Basketball and Soccer continue play over holiday break. Soccer (JVG/V) plays at Rocklin on Tuesday this week and JV Red plays El Camino at home. The Varsity Basketball team travels to the Nike Tournament of Champions on Sunday. The Frosh teams play in a tournament at Oak Ridge Dec. 20-22 and both the Frosh and JV teams are in Antioch following Christmas. Varsity soccer will compete in the Tri-Valley Tournament Dec. 27-28.  For a complete list of Athletic Events, click here.

Soccer Opens Season with a 5-1 Win over Rio 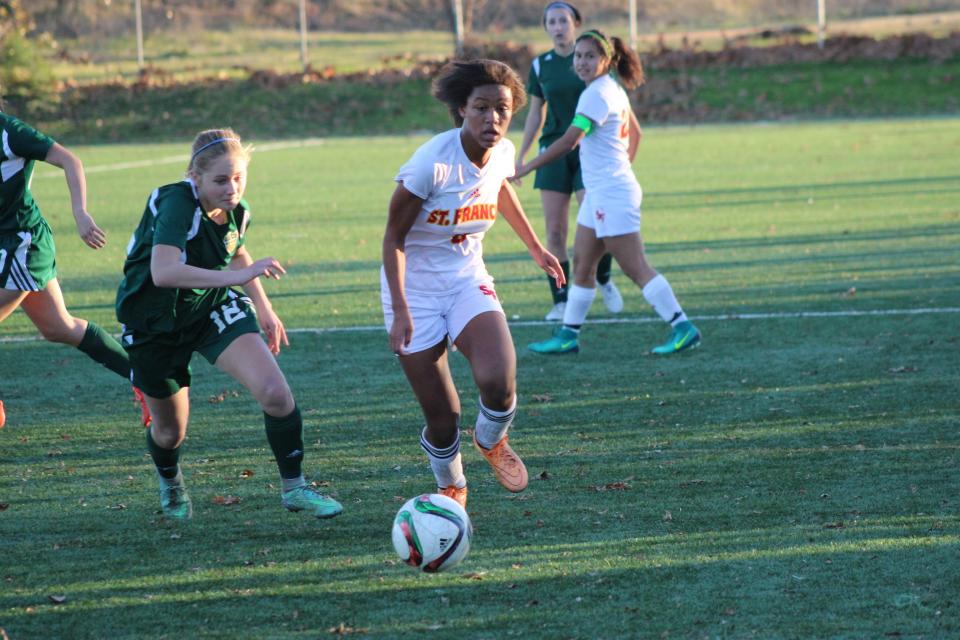 “It is exciting,” said DeFazio. “There are a lot of new players. We were all a little nervous but once we got on the field we were connecting good.” 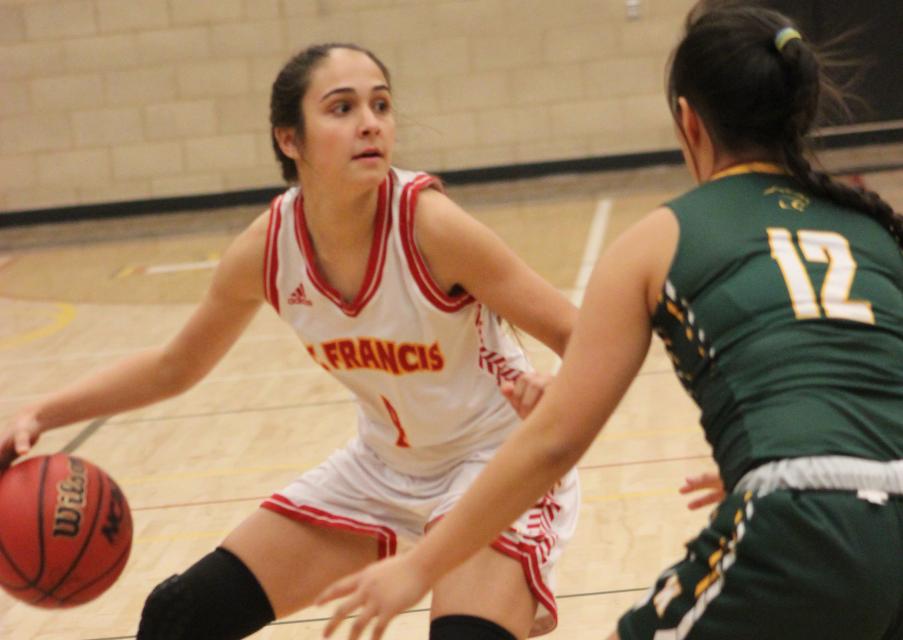 SACRAMENTO, Calif. – The St. Francis basketball team opened the 2016-17 season with a 69-40 victory over Kennedy in the home opener for the team.

“The young players are starting to learn what to takes to play at the varsity level,” said Head Coach Vic Pitton.

Senior Janae Fairbrook led all scorers with 16 points, while sophomore Nika Bagatelos had 12 and Logan Kelly contributed a double-double with 10 points and 14 rebounds.

“It is great to start the season off with a win,” said Kelly. “We all worked together as a team and helped each other out.” 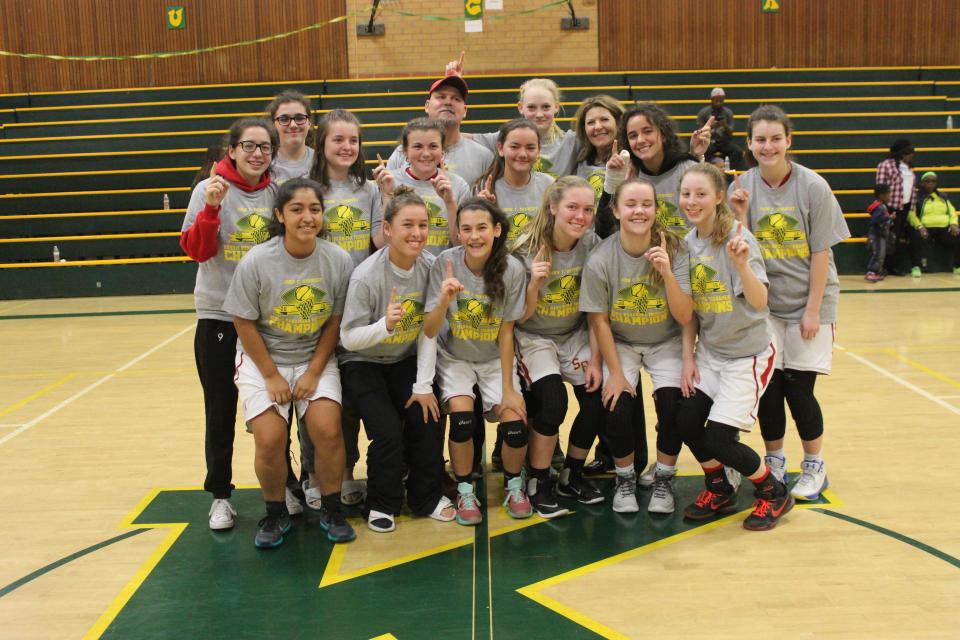 “It felt really good because we all pulled together as a team to win,” said McDaniel. “We worked together and really played hard for the win.” 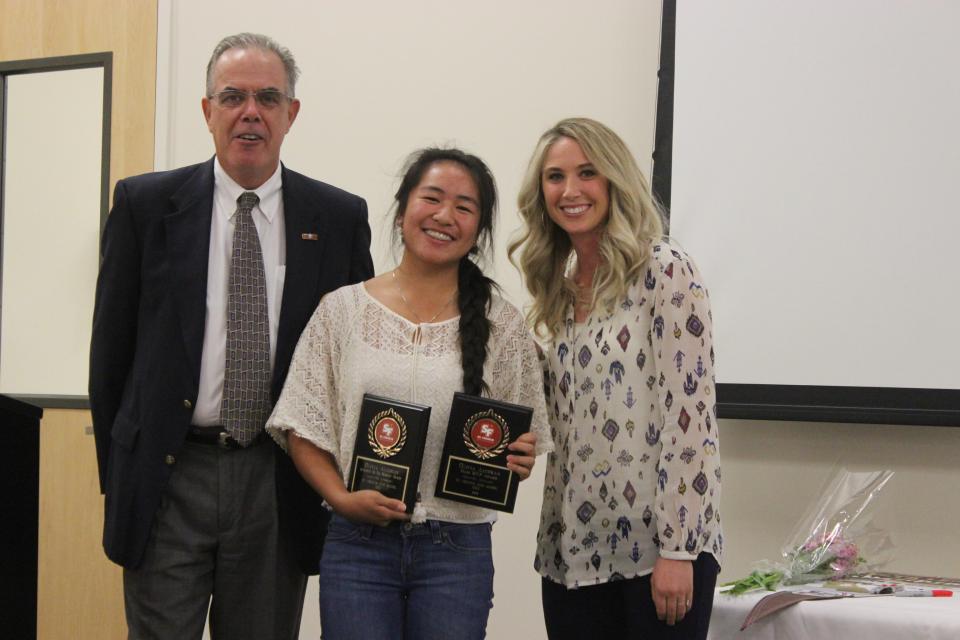 Jones, who was in his first season in the position, led the St. Francis golf team to a tie for seventh finish at the 2016 NCGA/CIF NorCal Championship at The Club at Crazy Horse Ranch. It was the first NorCal appearance for the program since 2013. 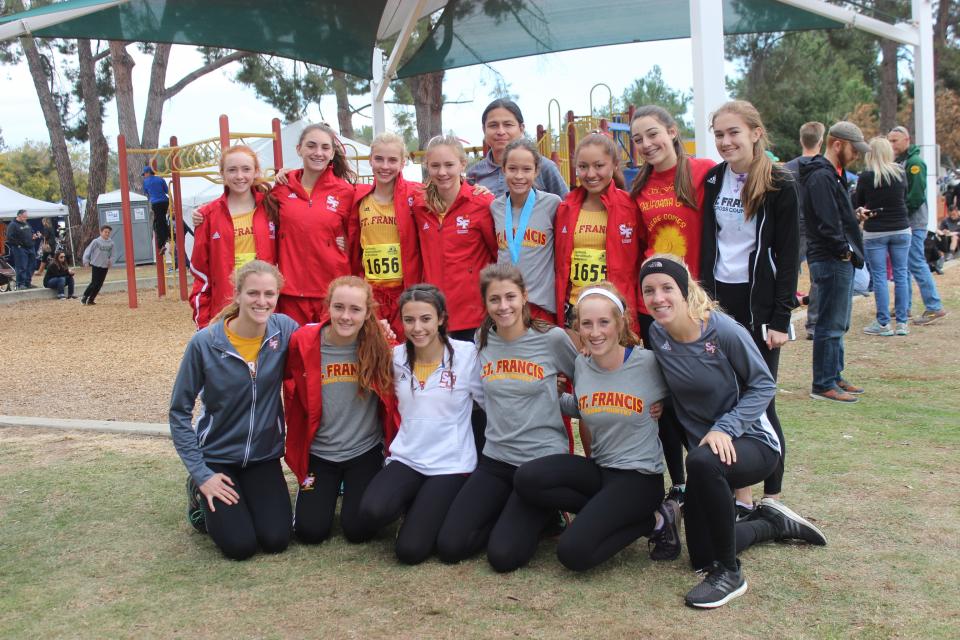 Basketball and Soccer open their 2016-17 seasons this week. Both teams have home games for all three teams on Tuesday. Soccer travels to Christian Brothers for Holy Cup on Thursday night at Hughes Stadium. All three basketball teams play in tournaments next weekend with varsity in Roseville, JV at Kennedy and Frosh n Pittsburg. For a complete list of Athletic Events, click here. 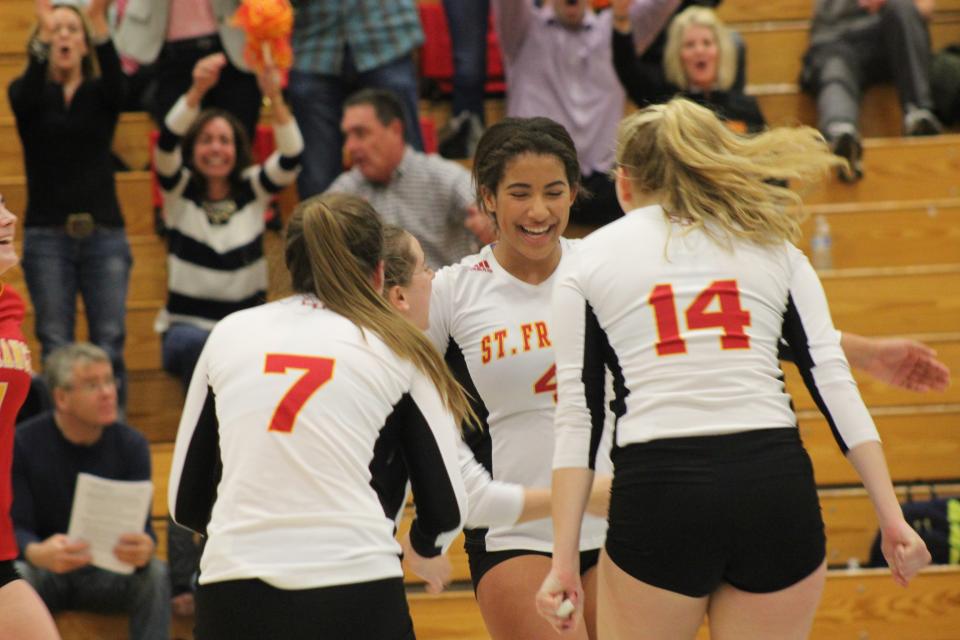 “I was proud of the girls” said Head Coach Alynn Wright. “They fought and battled. We just had more unforced errors tonight.”