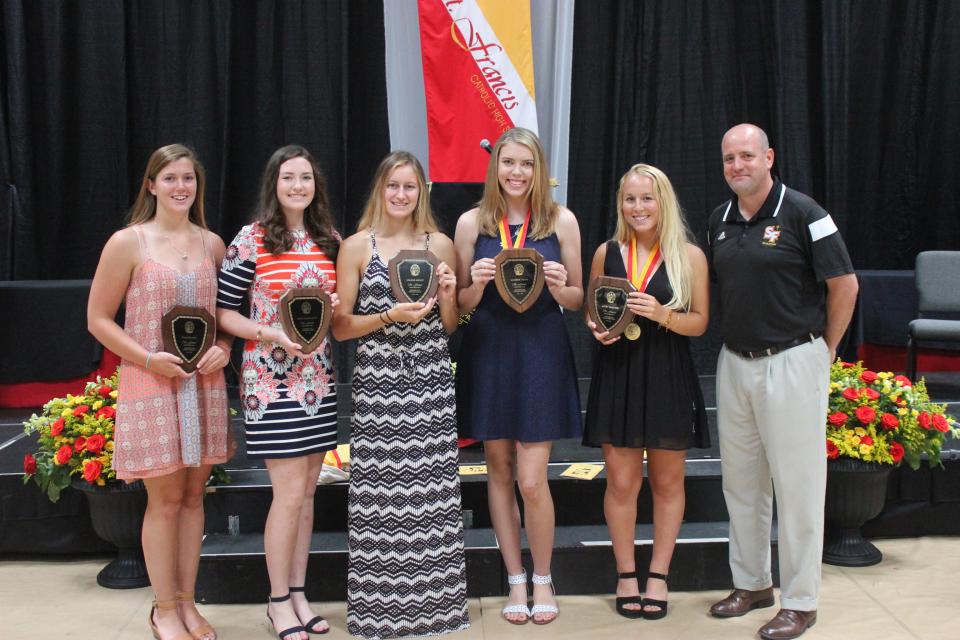 SACRAMENTO, Calif. – Five student-athletes were recipients of the Booster Club Awards on Wednesday at the St. Francis Awards Ceremony.

Tennis and soccer player Avery Spector and volleyball player Nina Sanfilippo were the Booster Club Leadership Award winners. The recognition is given to the student or students who demonstrate leadership in athletics.

Spector, who will attend Cal Poly in the fall, was a captain and the Delta League Player of the Year in tennis, leading the team to a league title and deep run in the Sac-Joaquin Section playoffs. She was also a captain of the varsity soccer team, leading the team to a Sac-Joaquin Section playoff appearance for the third straight season. She was a nominee for the Dale Lackey Scholar-Athlete of the Year award given out by the section office.

Sanfilippo was a captain and senior leader for the 2015 volleyball team, helping the Troubadours to the Sac-Joaquin Section quarterfinals. She was named the Delta League Sportsmanship Award winner and was noted by her coaches for her leadership on and off the court this season. She will attend UC Davis in the fall.

The Booster Club Scholar-Athlete of the Year Award recognizes the student or students with the highest combined achievement in both academics and athletics. The 2016-17 recipients were two-sport standout Ariane Arndt (cross country/track and field), all-state basketball player Lauren Craig and water polo standout Maggie Oys. All three posted weighted GPAs above a 4.00 for their careers.

Arndt is a two-time CIF State Track and Field Championship participant and is currently ranked among the Top 10 in the country in the 800 meters. She won the Delta League title in the 400 meters and 4×100-meter relay and ranks second in the section with the 4×400-meter relay. She also helped the Troubadours finish among the Top 10 in the state the last three seasons in cross country. She will run at UC-Berkeley next fall.

Craig, who recently signed to play at Pepperdine, was a Sacramento Bee All-Metro first team selection and the Delta League Player of the Year. She eclipsed the 1,000-point and 1,000-rebound marks for her career, was named to the NorCalPreps.com All-Nor Cal Second Team and was the leading scorer in the Optimist All-Star game for the South squad. She averaged 16.8 points and 13.4 rebounds per game, recording 29 double-doubles during her senior campaign.

Oys, who will play at Santa Clara, led the Troubies to the Sac-Joaquin Section team title for the first time since 2008. She was second on the team in goals (30) and third in points (50) while earning consideration for All-America honors and first team honors from the section and Delta League. She was a nominee for the CIF Scholar Athlete of the Year Award.

Every parent of a St. Francis Troubadour is a member of the St. Francis Booster Club. It is the best way to support our teams, earn service hours, meet other parents and have fun doing it. Boosters support events such as Crab Feed, Sports Physical Night and Booster Q’s. Carin Kaeser was the club president for the 2015-16 school year.