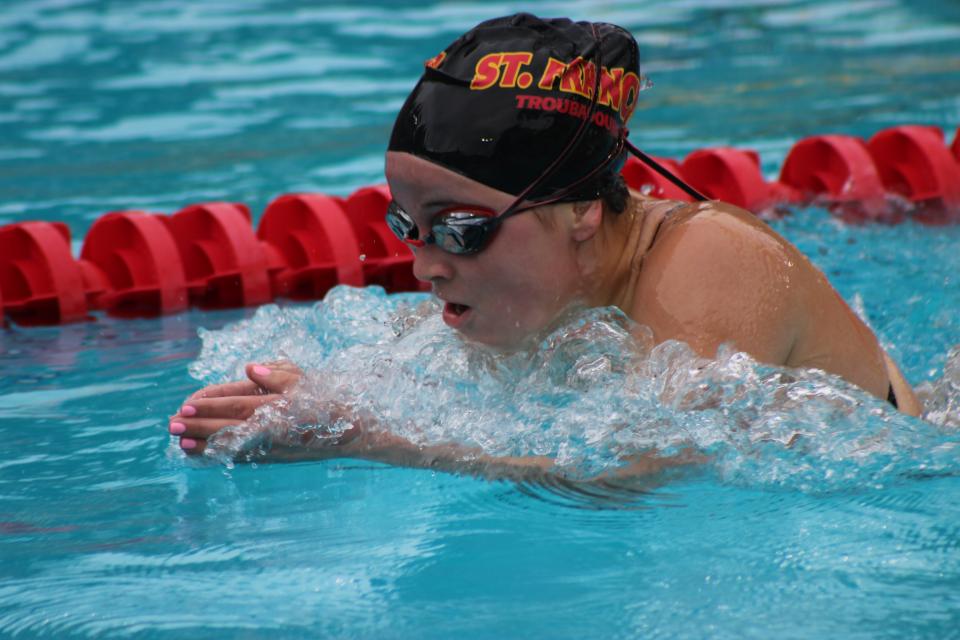 SACRAMENTO, Calif. – The St. Francis swimming teams posted a pair of victories over Carondelet last week to wrap up their dual meet season. The Troubadours went 8-1 in dual meets during the season.

“This dual helps us with our team confidence,” said Head Coach Richard Levin. “We swam well at the California Catholic Challenge and finished fourth. It is significant because we have never beat them in my time at St. Francis. It shows there is more left in the tank and we are getting hot at the right time of the season.” 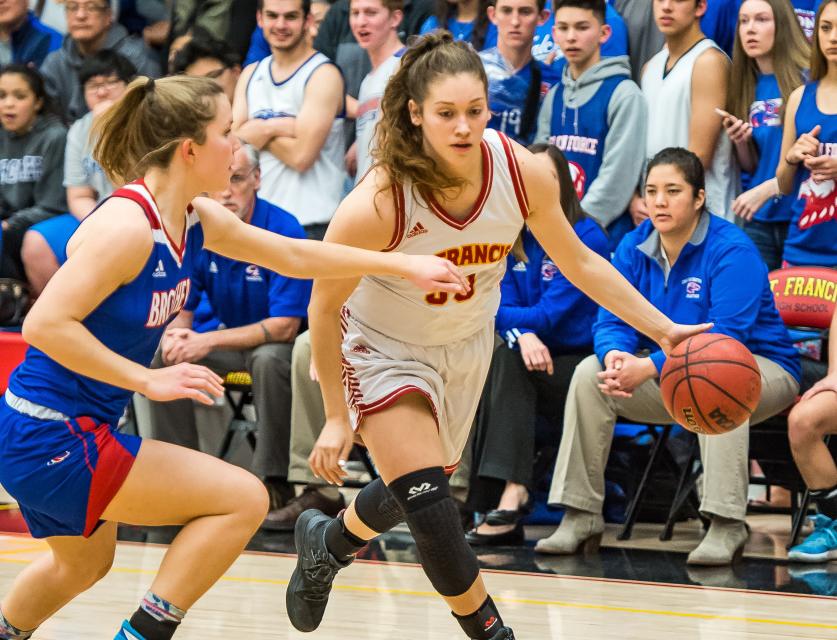 Razo was named to the Sacramento Bee All-Metro five player third-team selection and was an All-Delta league first team. She averaged a team-best 14.4 points in leading the team to the Delta League title and the NorCal Quarterfinals and Section quarterfinals. She scored a career-high 27 points against both Christian Brothers and Monterey Trail. 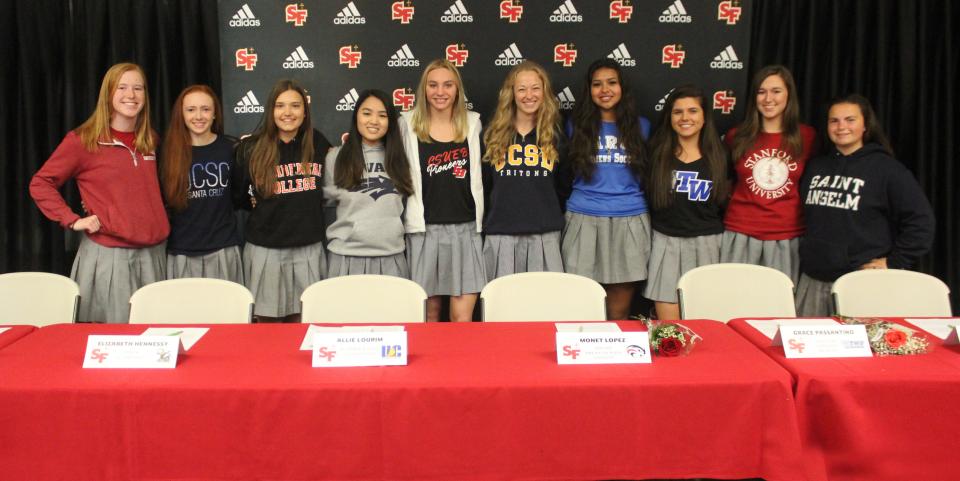 SACRAMENTO, Calif. – Twelve St. Francis seniors have committed to play a sport in college during the spring signing period that started Wednesday and were celebrated at a ceremony at the school today. Overall, 17 St. Francis student-athletes from the Class of 2017 have made commitments or signed a National Letter-of-Intent this year.

The Troubadours made commitments to schools including Duke and Stanford and several California schools from American River College to UC San Diego. The Troubies will travel as far as away as New Hampshire to play softball at Saint Anselm. 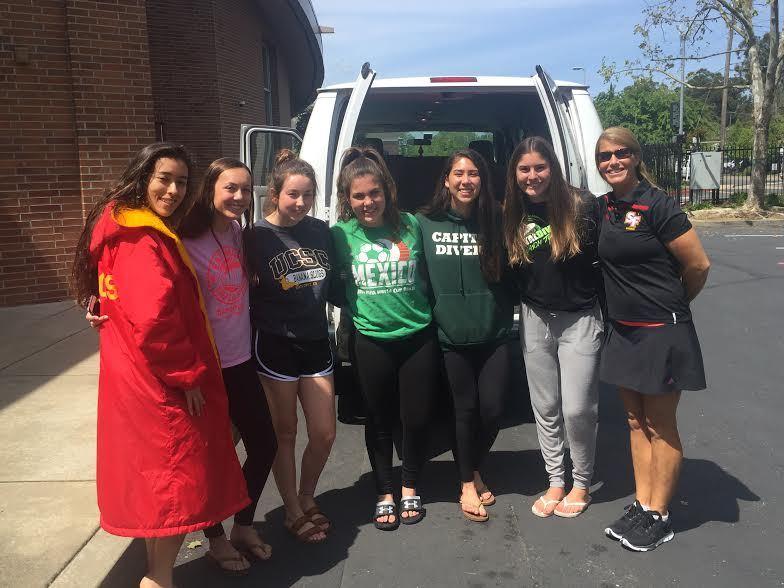 CONCORD, Calif. – Freshman Madison Miles finished fifth among four Troubadours with a score of 136.65 in the varsity competition at the DeLaSalle Invitational on Monday. Junior Molly Wilson won the meet with a score of 246.20. Callista Stanley (114.40) and Maddie Covert (113.10) finished sixth and seventh, respectively. 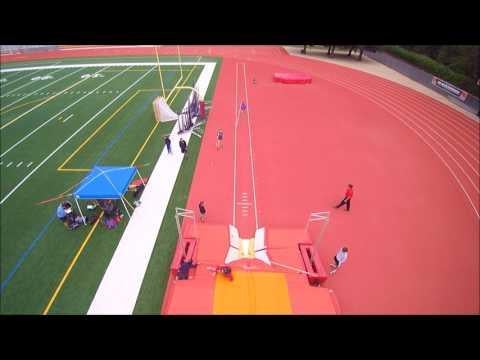 SACRAMENTO, Calif. – St. Francis won both meets at the Jesuit Invitational, out-scoring Monterey Trail among 14 teams 134.5-111 on the varsity side, while the Frosh/Soph team scored 113 points to lead an 11-team field. 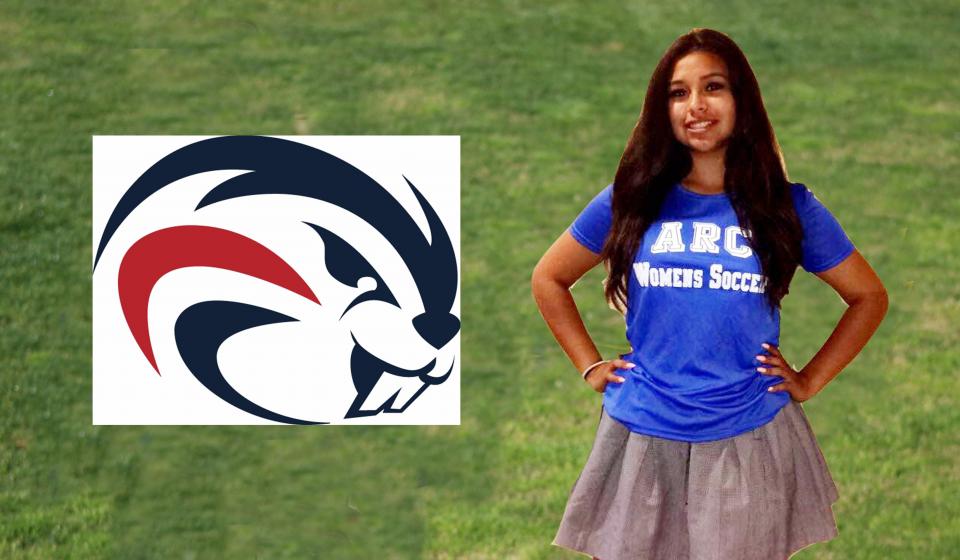 SACRAMENTO, Calif. – St. Francis senior Monet Lopez will continue her soccer career at American River College. She will be part of the St. Francis Signing Day Celebration on Wednesday, joining 11 classmates who have made commitments to play a sport in college.

Tijerino-Santos to Play Soccer for ARC 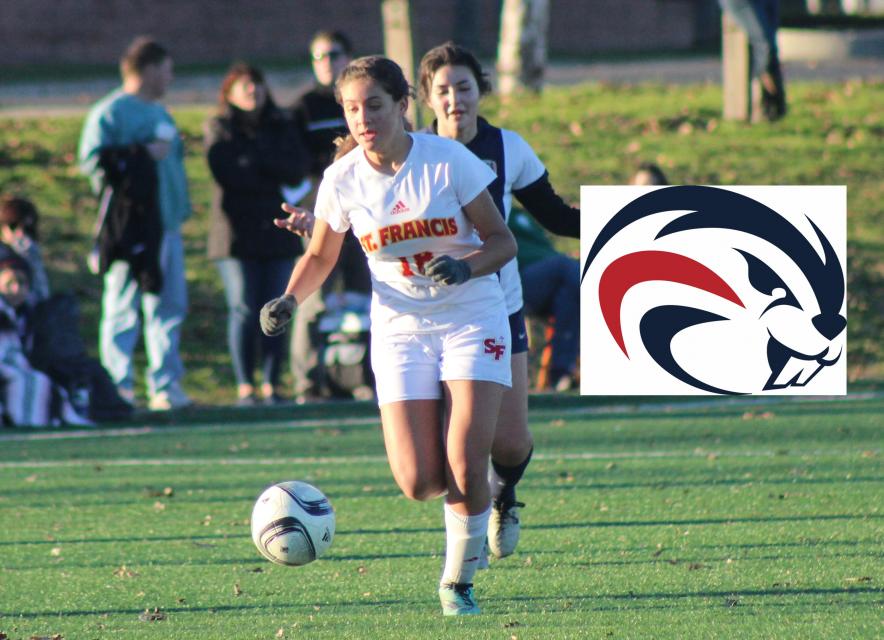 SACRAMENTO, Calif. – St. Francis senior soccer player Savannah Tijerino-Santos has committed to play for American River College and will join the local program to play and attend school next fall.

“I am very excited and I am glad I get to keep playing soccer,” said Tijerino-Santos. “I would have been upset if I had stopped playing after high school. Doing it with one of my best friends, I am super excited.”

Elizabeth Hennessy to Run for UCSD

SACRAMENTO, Calif. – St. Francis senior Elizabeth Hennessy will continue her track career next year, competing for the UC San Diego Tritons. She is one of 11 Troubadours making commitments to play or compete collegiately next fall during the spring signing period.

SACRAMENTO, Calif. – St. Francis senior Sally Ferguson, who scored the winning goal in the section championship match in 2015, will continue her water polo career at Santa Clara next season.

“I am really excited I get to extend my water polo career,” said Ferguson. “I would have been sad if it ended here. I am excited to be part of a team in college. It will definitely be a lot of fun.” 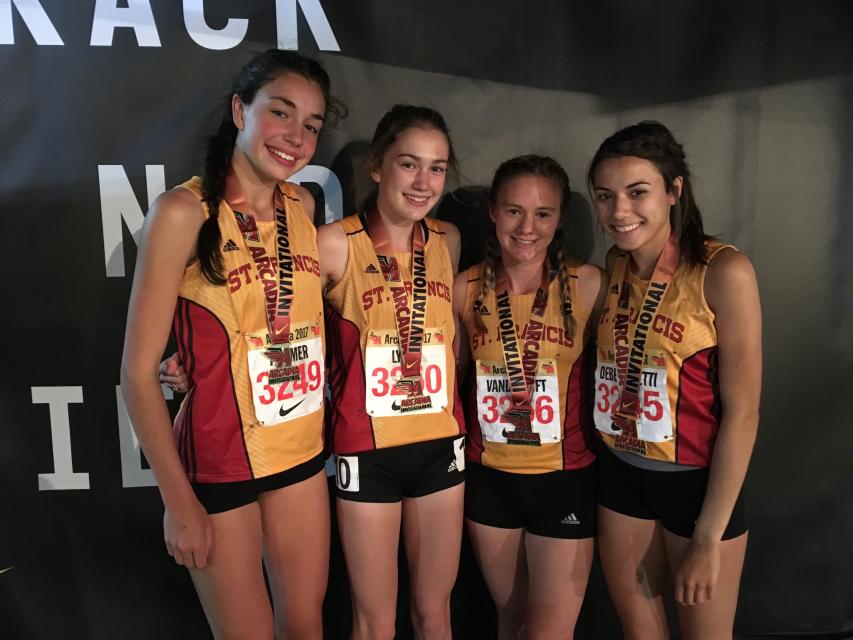 ARCADIA, Calif. – Led by a school record in the 4×1600-meter relay on Friday night, the St. Francis track and field team was well represented at the Arcadia Invitational. 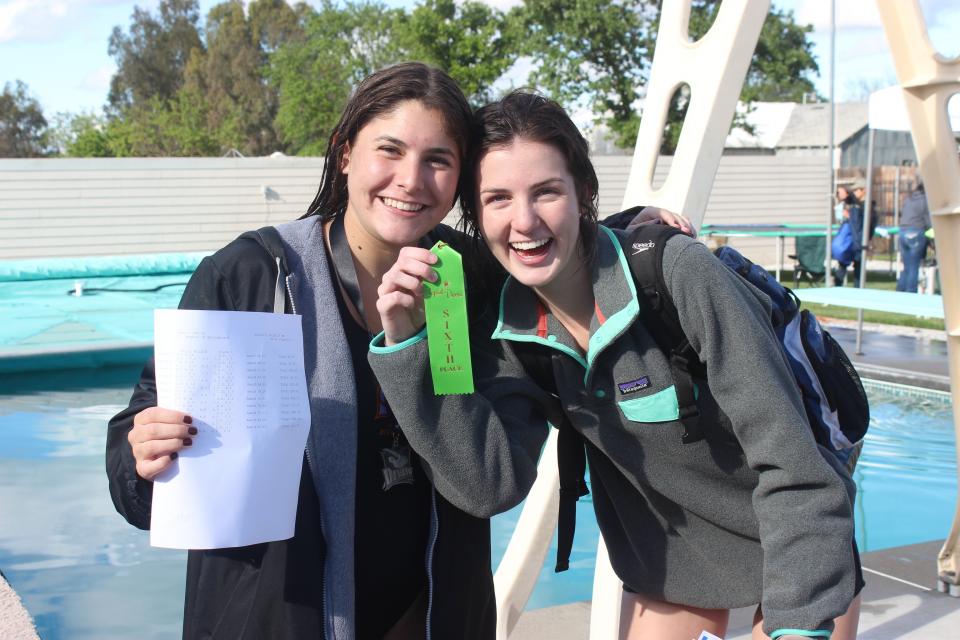 RIO LINDA, Calif.  – Junior Molly Wilson finished second at the Jesuit Invitational with a career-best 441.90 on her 11-dive list.

“I think I did ok,” said Wilson. “I could have done better on a couple of my dives but I am happy with my overall performance. Hopefully I can hit every dive at sections.”

Junior Camille Lutes finished sixth overall with a score of 159.85.

LODI, Calif. – St. Francis senior Claire Schutz was named a recipient of the A. Dale Lacky/CSEA Scholarship awarded by the CIF Sac-Joaquin Section office and will recognized at a ceremony on April 25. Schutz was selected to represent the Delta League as the league’s top female student-athlete and will receive a $500 scholarship. 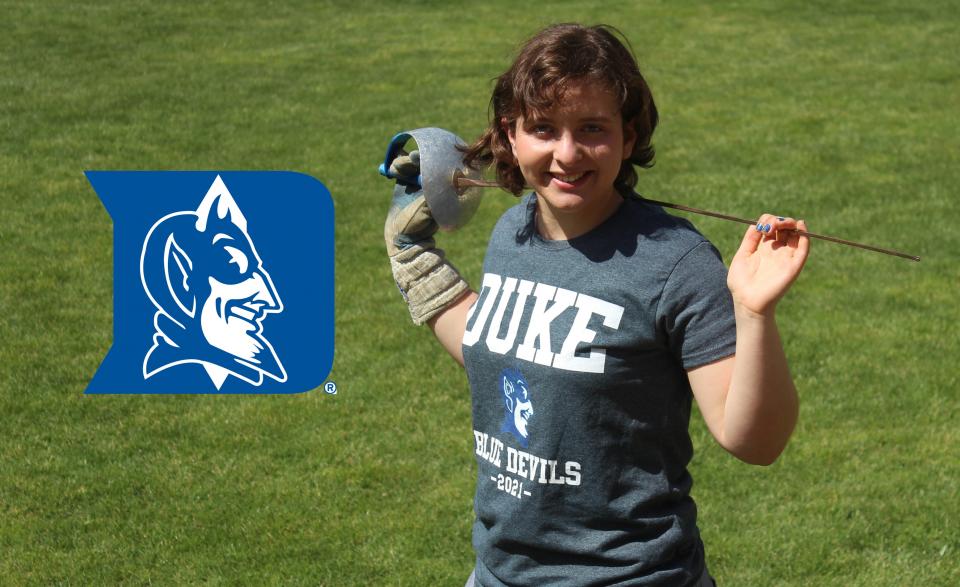 SACRAMENTO, Calif. – Lindsey Lohan, a phone book and a family rule. St. Francis senior Gabby Zegers definitely came across fencing in a non-traditional way. But eight years later, she is devoted to the sport and is going to Duke to join their nationally-ranked program on scholarship. 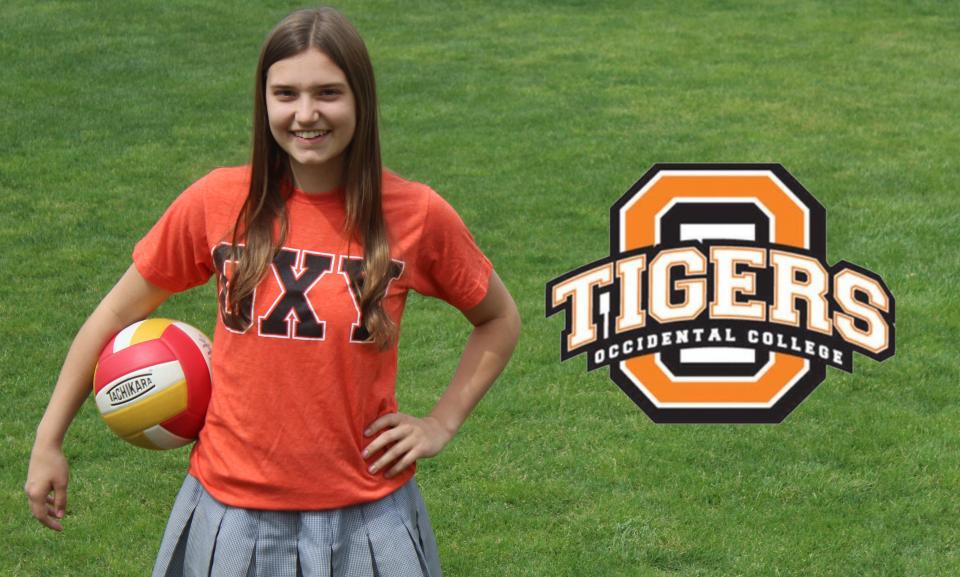 “I have always wanted to play volleyball in college,” said Davis. “I wanted to make sure I found the right school that I could play at and have everything else I was looking for in a school. I think I have found that in Occidental.” 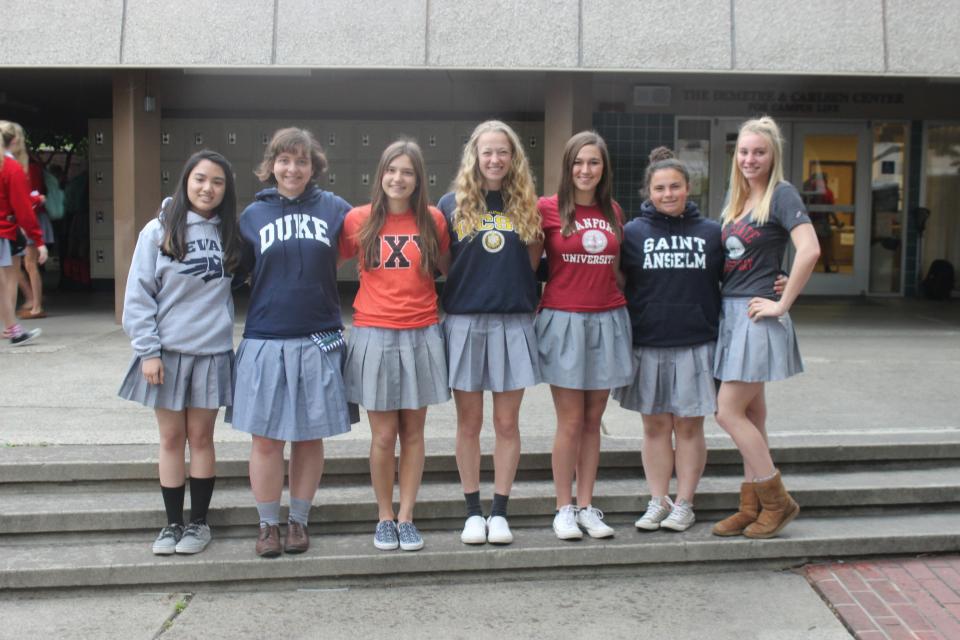 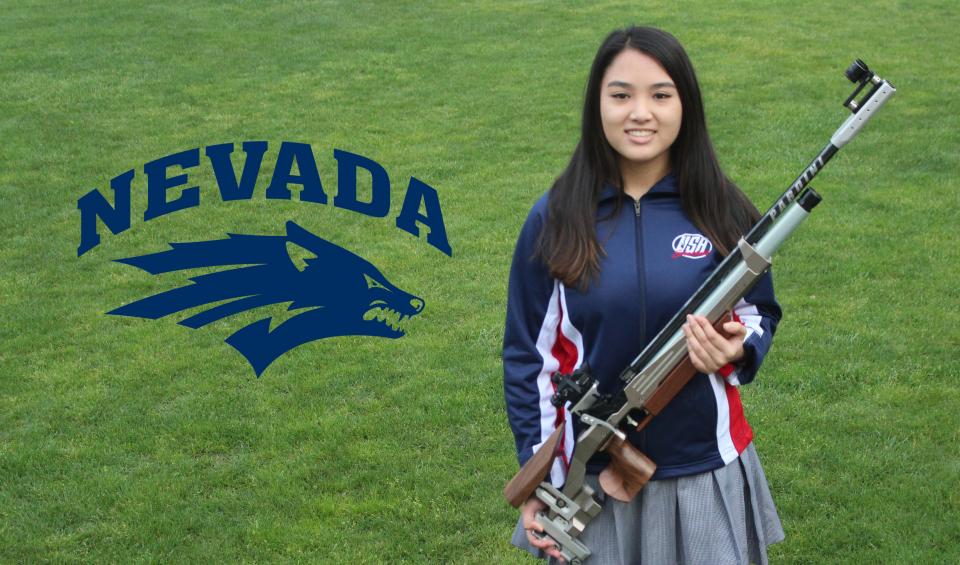 SACRAMENTO, Calif. – St. Francis senior Veronica Del Mar has committed to attend the University of Nevada-Reno and will compete on the Wolfpack’s NCCA rifle team.

“I am so excited to compete against my current teammates who are going to other NCAA schools,” said Del Mar. “I have put a lot of work into this and I don’t want to stop here. It is going to be harder and a lot of fun. It will be great to compete against people not just California but the whole United States. Hopefully, I will make the travel team.” 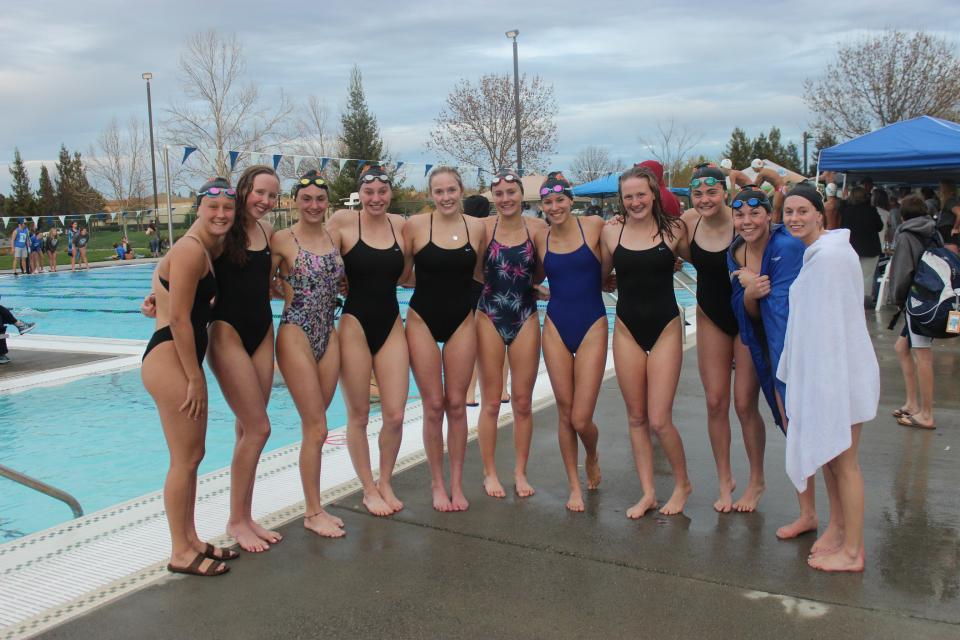 Elk GROVE, Calif. – The St. Francis swimming team posted a 125-45 win over Franklin on Wednesday at the Wackford Aquatic Center. The Troubadours swept four of the events and won 10 of the 11 overall to lead the team to victory. Senior Tatum Roepke and freshman Chloe Bebbout each claimed two events. 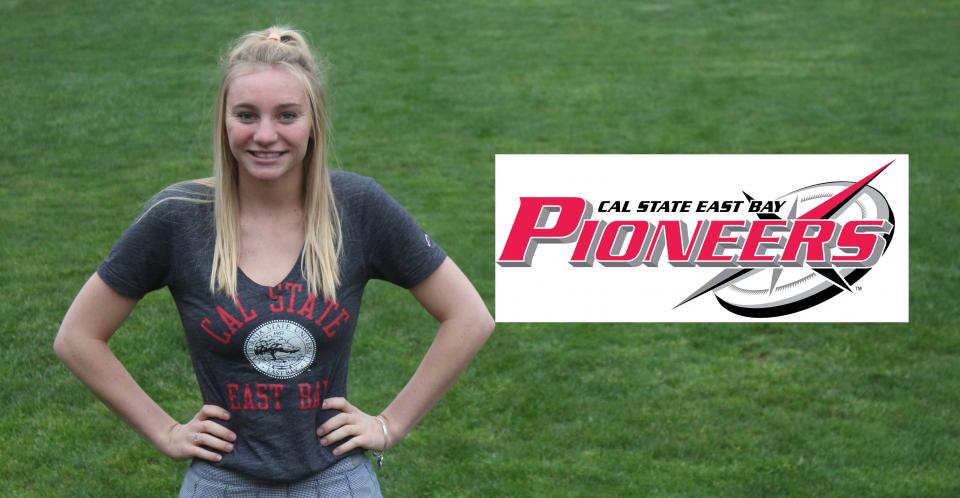 SACRAMENTO, Calif. – Senior Tatum Roepke was practically born in the water so it only makes sense she continues swimming in college. She has committed to swim for Cal State East Bay next fall.

“I went on my recruiting trip and the team just felt like a family to me,” said Roepke “It felt like I was already part of the team. The coach is awesome. He came to watch me swim in San Diego. I wanted to step up what I am doing from USA Swimming to College swimming.” 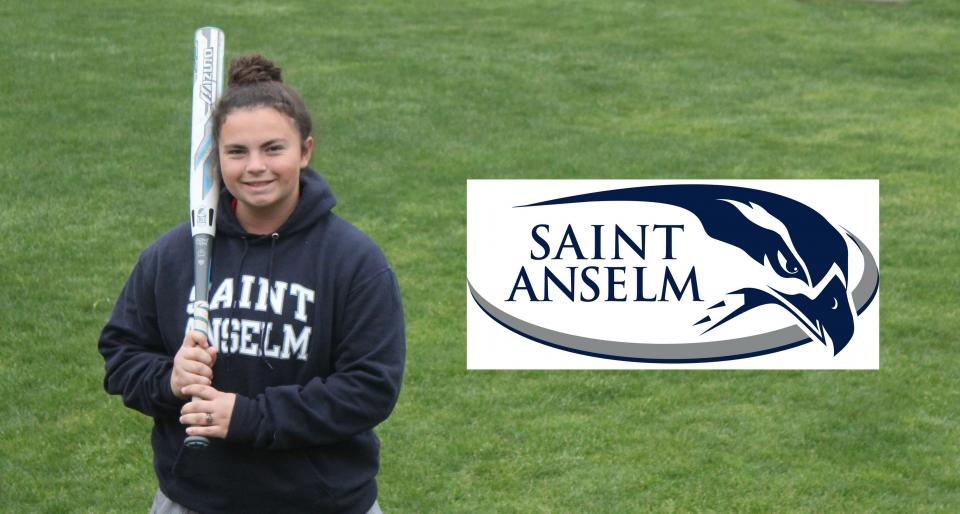 “It took a lot,” said Washburn of her softball career. “I have been trying to do it (have a chance to play softball in college) since the seventh grade. To finally be able to say, I am going somewhere to play softball is achieving that goal.” 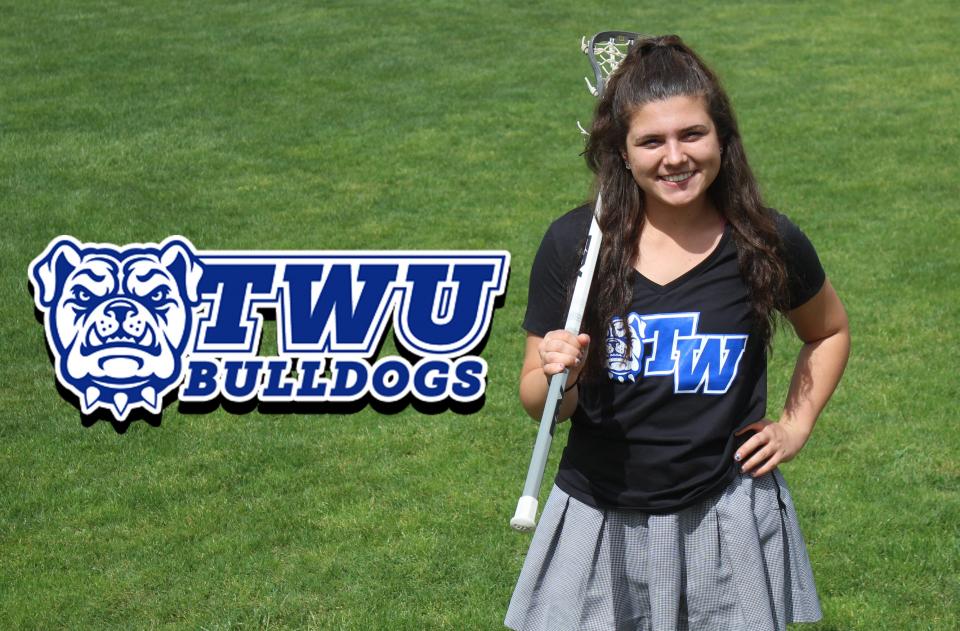 SACRAMENTO, Calif. – Senior Grace Passantino will continue her lacrosse career at Tennessee Wesleyan next fall. She will participate in the St. Francis Signing day Celebration on April 12.

“I plan to attend Tennessee Wesleyan in Athens, Tenn.,” said Passantino. “It started with a recruiting process and visit. I got a sense of the school and the team. It seemed like a great fit because the girls were so accepting and loving.”

Tennessee Wesleyan is a member of the Appalachian Athletic Conference and competes in the NAIA.

A Year Ago This Week: Arndt Earns Arcadia Athlete of the meet 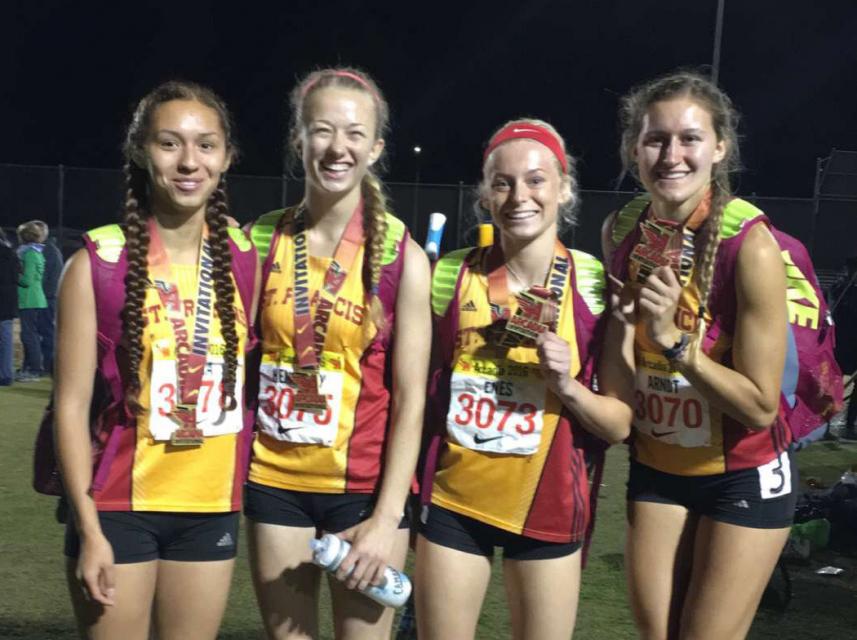 ARCADIA, Calif. – St. Francis’s ariane Arndt, who graduated in 2016, was named the Arcadia Invitational Open Athlete of the Meet a year ago this week. 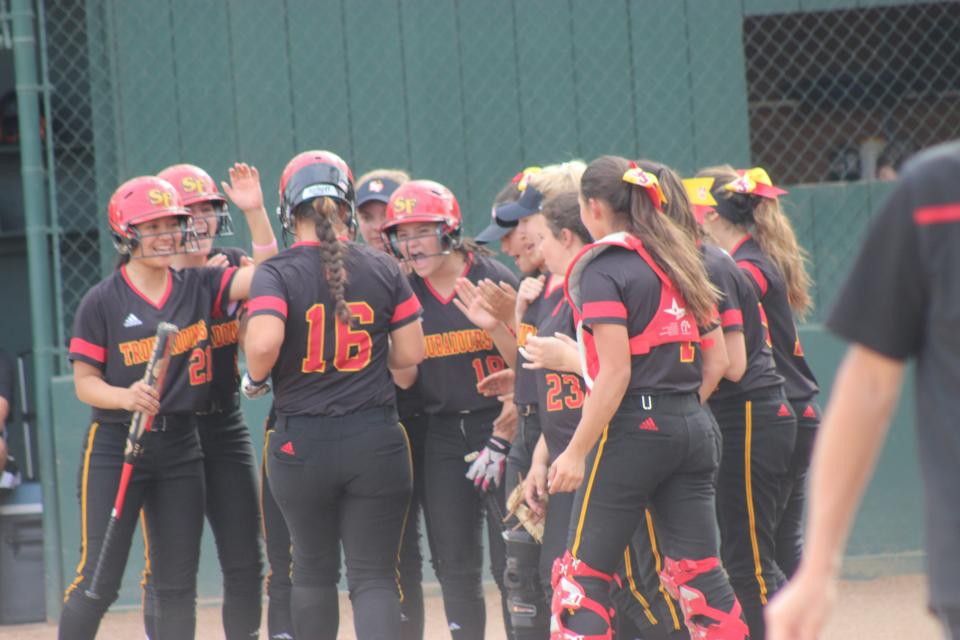 “It felt good (to get the home run),” said Valentine. “At first I did not think it was going to go out. But I felt like I got all of it.”

St. Francis (7-9) led 3-1 after the first highlighted by Valentine’s second home run of the season.

“We were really hitting the ball well,” said Valentine of the early success. “We were finding the gaps and getting on.” 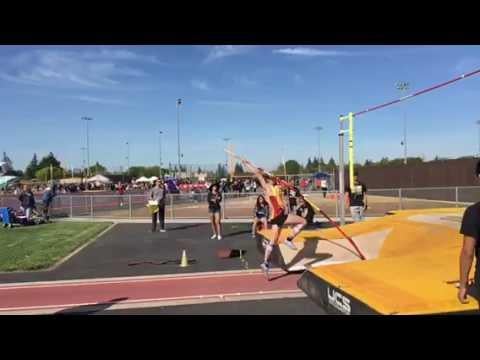 SACRAMENTO, Calif. – The St. Francis track and field team continued to get strong performances on Saturday from their vaulting unit, winning two competitions at the Delta Mustang Invitational. 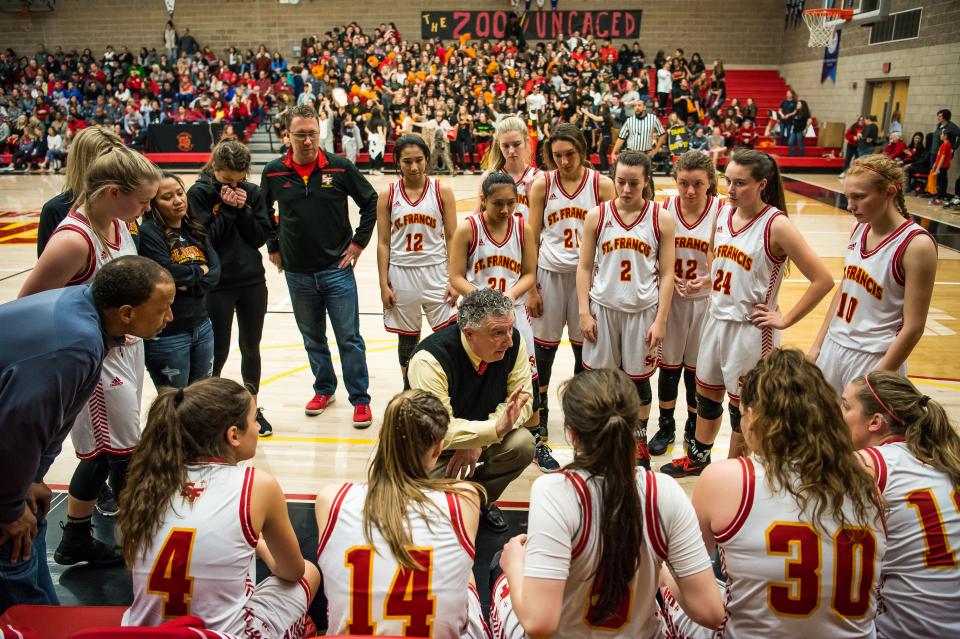 “It is certainly a privilege and an honor to coach such dedicated athletes,” said Pitton, who won his 300th career game this season and led the Troubies to the NorCal quarterfinals.

Pitton, who also coached the team in 2015, will coach a group including seniors from St. Francis, Elk Grove, McClatchy, West Campus and Vanden among others.