Alumna and her Class Ring Reunited after 42 years!! 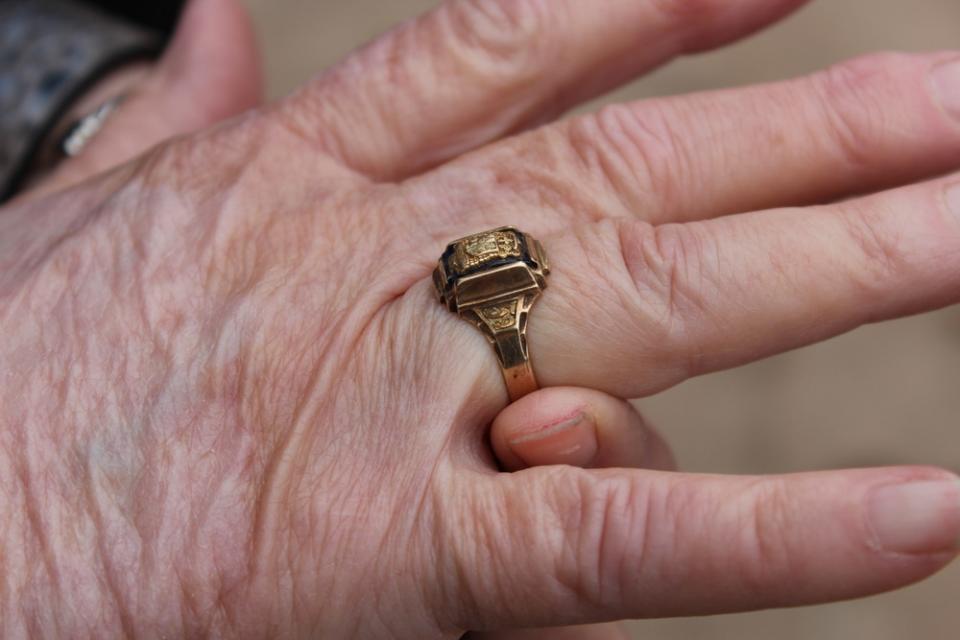 Santana “Tina” Mandella, graduate of Bishop Armstrong class of 1958, was finally reunited with her class ring after she thought it was lost for a lifetime. In 1971, she loaned the ring to her teenage daughter who had begged to wear it. Shortly thereafter, Tina’s daughter sadly reported that she had lost the ring and all involved thought they would never see it again. Life went on and Tina’s daughter grew up and had a daughter. Occasionally, Tina thought of the ring over the years, but with Bishop Armstrong closing in 1964 there was no chance of replacing the ring.

That was sure to be the end of the story until last November when two friends, Jim Miller and Rob Brugger, were building a pathway in the front yard of Jim’s Curtis Park home. As they loaded up Rob’s truck with some excavated dirt, Rob noticed a shiny ring just sitting on top of one of the dirt piles!

The two stopped working and focused on the object that mysteriously unveiled itself. Jim a reporter in the Sacramento bureau for The Riverside Press-Enterprise, cleaned the ring and along with the help of his wife Ellen, utilized a high resolution scanner to determine that it was class ring from 1958 with the initials TAM engraved on the inside. The duo discerned that the crest was parochial and that it
matched St. Francis’s crest or rather the Bishop’s crest of the diocese. As fate would have it, Rob had an aunt that was a nun in Sacramento. Through her life’s work he was familiar with the history of the area’s Catholic schools and knew that Bishop Armstrong was a Catholic girls high school that became St. Francis High School. Jim subsequently contacted St. Francis High School and together with the staff they were able to trace it back to the original owner – Santina “Tina” Mandella (TAM).

This past December, Tina, Jim and Rob met at St. Francis where Tina was reunited with her ring after an absence of close to 40 years! As she was sure the ring was gone forever, Tina was thrilled to have her ring back. She conveyed to the gentlemen that her granddaughter (mentioned above) would soon be moving back to Sacramento after having graduated from college, and Tina’s intention was to give her the ring.