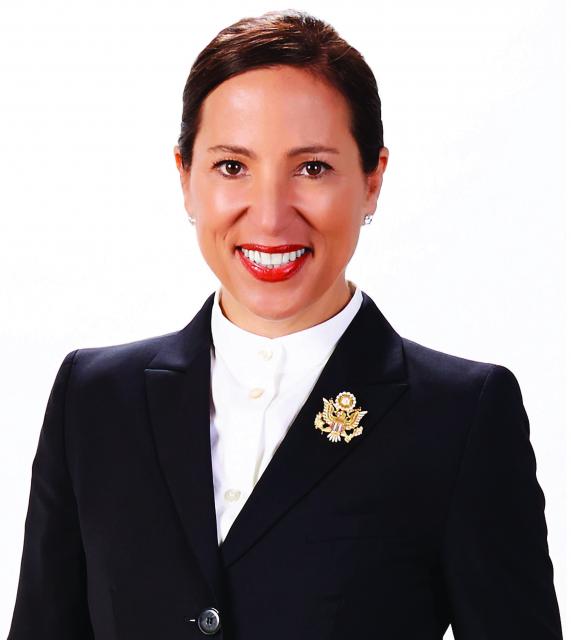 Congratulations to alumna Eleni Tsakopoulos Kounalakis ’85 on her election to Lieutenant Governor of California! If you missed the article on Eleni in the Spring 2018 issue, read it here:

We know Troubadours are women who change the world; we had a chance to catch up with Eleni Tsakopoulos Kounalakis ’85 to hear where her post-St. Francis journey has taken her and what lessons from her alma mater she has taken on the journey.

Always a woman who wanted to experience the world, Eleni spent her sophomore year at a boarding school in Lugano, Switzerland before embarking on her Troubadour education. While transferring schools mid-way through high school can seem intimidating, Eleni found her St. Francis home to be warm and welcoming and affectionately remembers the many friends she made while a student here. Troubies who remember her debate performance as Walter Mondale*, alongside Claire Chatfield as Geraldine Ferraro, will not be surprised that Eleni is currently campaigning to be the next Lieutenant Governor of California.

“A part of running for office is reviewing your old files. I pleasantly found a report I had written in high school about the 1984 election. There was no question the work we were doing at St. Francis was very relevant,” Eleni reminisces. Her social studies teacher, Trisha (Garretson) Uhrhammer, had connections at the Capitol through her graduate work in history and government. She was also involved with the League of Women Voters and encouraged her students to be informed and active in government. She made a big impact on Eleni.

After completing her MBA at UC Berkeley’s Haas School of Business in 1992, Eleni went to work for the California Democratic Party during the historic 1992 election – the Year of the Woman, when Dianne Feinstein and Barbara Boxer were elected to the U.S. Senate. After the election she went to work for a home builder in the Bay Area to hone the business skills that she grew up learning around her father’s business. She later joined him at AKT Development where she spent the next 18 years rising from Project Manager to President. These were all high growth years for the company. “It’s exciting to see more and more women going into housing and land development. We are short more than a million and a half housing units in California, and, since 2008 particularly, we are really seeing a ‘missing middle.’ A big part of my platform for Lieutenant Governor is to be able to deliver more housing to middle class Californians,” Eleni notes. This work earned her recognition as one of Sacramento’s most prominent businesswomen.

While always politically astute and active, Eleni’s next adventure took her, husband Markos Kounalakis, and their two sons, overseas. Appointed by President Barack Obama, Eleni served as Ambassador to Hungary under Secretary of State Hillary Clinton from 2010 to 2013. During her tenure, Hungary was a key ally in U.S. security policy, held elections in which a center-right candidate gained a two-thirds supermajority and rewrote the country’s constitution, and grappled with the rise of Hungarian nationalism and anti-Semitism. “Representing the U.S. in Hungary was the honor and privilege of my life; I would never have expected it when I was a student at St. Francis. Here I was, 43 years old and being sworn in. What I learned academically and the confidence that was built during my time here confirmed for me that I could do this important job,” Eleni notes.

As the first Greek-American woman, and one of the youngest women ever to serve as a U.S. ambassador, Eleni recounts her experience in her book, Madam Ambassador: Three Years of Diplomacy, Dinner Parties, and Democracy in Budapest. “Without my incredible St. Francis English teacher, Mrs. Larson, this book would not have been written. She taught me how to write and gave me books she thought I should read,” Eleni affectionately recalls. “She gave me quite a bit of confidence and made me believe I could go out and take on challenges in the world.”

Known professionally and on the campaign trail for her values of hard work, education and political activism, we asked Eleni how she developed these values and if there were any left off. “These values were ingrained in me by being the daughter of an immigrant who started out as a farmworker. My father was different than the fathers of the kids I went to school with. But at the same time, our entire family was so embraced in Sacramento. We had the opportunity to work hard and play by the rules,” Eleni remembers. “Our family always felt lucky that we landed in Sacramento. “The other value I would add to the list is patriotism.”

When asked what advice she would share with Troubadours wanting to enter politics, “It’s time!” Eleni stated. “Young women graduating high school now are entering the workforce in equal numbers to men. Never give up on the expectation that you will rise up the ladder in equal numbers. This is why so many women are running for office now, and so many will succeed. It’s time!”

When talking with a Troubadour, it’s hard not to ask what she took away from the recent film Lady Bird. Eleni shared, “What Lady Bird reminded me about my St. Francis experience was that we were chomping at the bit to get out into a bigger world because we had the confidence that we would be able to navigate it.”

Final words to our Troubadours from Madam Ambassador, “Plenty of things will happen in life. Feeling discouraged is part of being ambitious. It comes with the territory. If you pursue your dreams, you’re going to get discouraged. Expect it. But remember all the lessons you learned at St. Francis and the confidence you gained. Then keep on going and be persistent.”

*Correction: The story above incorrectly stated Eleni Kounalakis debated the role of Walter Mondale during the 1984 campus election. Eleni has since corrected this, as she played the role of a fictional Editor-in-Chief of the newspaper, and regrets any confusion caused by her somewhat hazy 30-year old memory.