Ladd Soaring in the Pole Vault 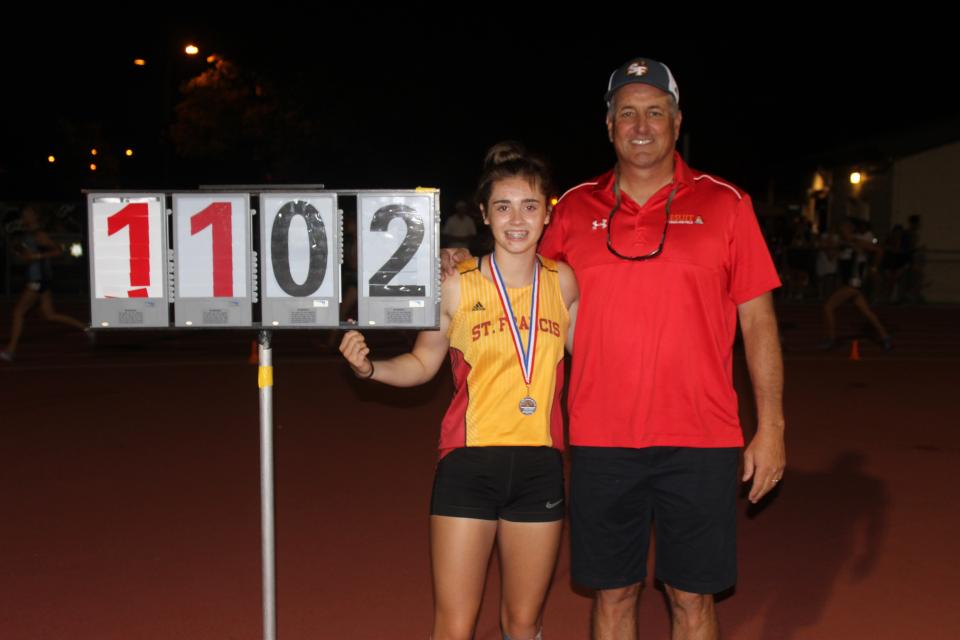 ELK GROVE, Calif. – When your meet ends with a phone call with an Olympian, you probably had a pretty good day. That is what happened to St. Francis freshman Meghan Ladd, who talked to Olympic Gold medalist Stacy Dragila Friday night.

Ladd, who is from Folsom, finished third in the Sac-Joaquin Section division I pole vault finals with a season-best clearance of 11-2 to earn a spot in the Masters meet with three berths to the state championships on the line.

“It is exciting and you are flying through the air,” said Ladd of her new event. “I did not think I would get third today but I felt confident in my runs.”

Ladd, who wears her signature high socks in each event, competed for the St. Francis cross country team in her first semester at the school last fall. She was recruited to compete in the pole vault by senior teammate Olivia Birmingham.

“She came into Latin and said she was recruiting people for pole vault,” said Ladd of Birmingham. “She talked about it and I was just doing cross country at the time. I thought pole vault would be cool because of my gymnastics (background). It worked out and on the first day it felt fun.”

Given she only began competing in the event three months ago, her progress this season is amazing.

The gymnastics experience helped her take to the event right away. She left the sport during eighth grade but not before finishing second in the bars and 11th overall at the NorCal Level 4 North State Championships.

“With her gymnastics background, she literally has been training (for the pole vault) for 11 years,” said pole vault coach Mike Kenison. “Her power is the most obvious thing. When she gets on the pole, she can rock back every time no matter what the plant or step is. It is amazing to watch.”

Ladd cleared 7-6 in her first meet at the Bulldog Invitational on Feb. 25. She then set the school’s freshman mark the next week at the Sacramento State Classic and has now improved her best clearance eight times this season.

Ladd cleared the first three heights (9-5, 9-11, 10-5) without a miss Friday, then made 10-11 and 11-2 with only one miss at each height.  She is now fourth on the all-time school list, third in Division I and among the top 50 overall in the state of California, ranking as the third best freshman overall in California and among the top 20 freshmen in the United States.

“11-2 is an incredible freshman vaulter,” said Kenison. “You can speculate here and think about 13-14 feet in a couple of years. The thing that is best about Meghan is she works incredibly hard. She is one of last kids to leave the runway. That is what is going to get her somewhere is that effort and determination.”

Now the sky is the limit, literally. She will work with Dragila, the 2000 Olympic Gold medalist and two-time world Champion, at a camp at UC-Berkeley this summer.

“I am just really excited,” said Ladd. “I made it (to Masters) and hopefully I can go a little higher and maybe PR again,” said Ladd.

She will compete on Friday at Elk Grove High School at 5 p.m.