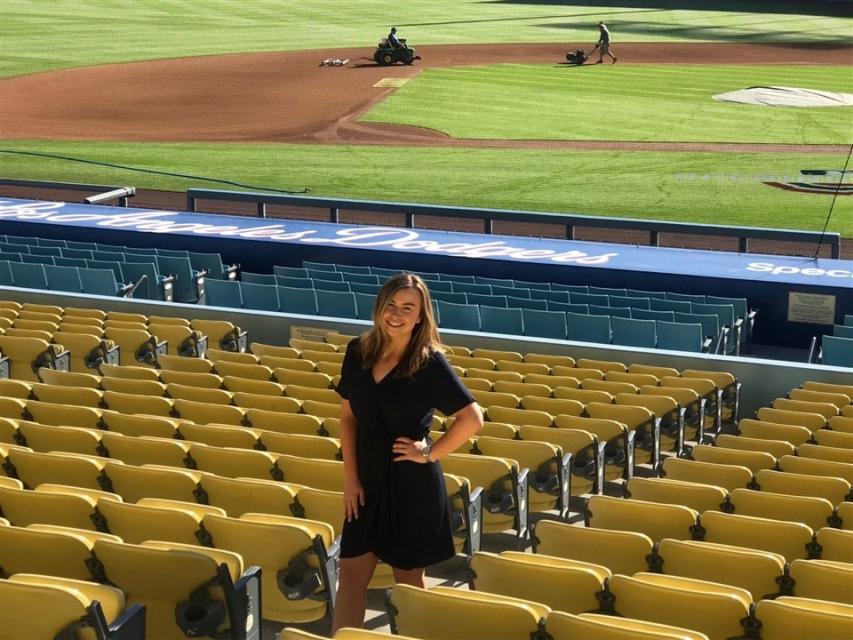 St. Francis Alumna Kaitlyn Cozens ’13 is a recent graduate of the University of Michigan. She was a four-year letter winner with the Water Polo program and graduated from the School of Kinesiology with a degree in sports management in April, 2017. She was a Big Ten Distinguished Scholar, two-time Academic All-Big Ten selection and received the U-M Academic Achievement Award twice. She finished her career with 51 games played with 11 goals, 11 assists, 22 points and 13 steals and was a member of two CWPA Championship teams and two NCAA appearances. Cozens started getting experience in college with an internship at Palace Sports & Entertainment before positions with Los Angeles Rams and now with the Los Angeles Dodgers. She answered some questions about her job with the Dodgers and interest in sports, as well as her experience at Michigan.

How did the Dodger opportunity happen?
“It all happened fairly quickly. I saw the job posting on LinkedIn and applied on Teamwork Online, which is a website that sport organizations use to list job postings. Between my previous experiences, both in the classroom and my internships, and personality, I stood out in my interview and was able to get the job.”

What are your responsibilities your position?
“I work in our sales department and my day-to-day responsibilities change depending on if it is a game day, away game, an off day, or off season. I focus mostly on group outings, so working with people to get their school, family reunion, team, or coworkers out to a Dodgers game. I also do a lot of customer service, making sure groups, mini plan, and season ticket holders are happy with their experiences.”

What drew you to a career in sports?
“Michigan has a phrase “the team, the team, the team” which is from Bo Schembechler’s speech about coming together as a team and the success that it can create. That mentality is something I’ve adopted into my everyday life. Teamwork and the culture that it creates is something that is important to me and that I found through being an athlete. That mentality also is part of our front office. I’ve found that working with the Pistons, the Rams, and now the Dodgers that there is a heavy emphasis on working as a team and how much can be achieved when working together versus individually. There’s a camaraderie that’s comes from working in this type of environment that translates so well to the success of the department and organization.”

What did you learn during your internship with the Rams?
“One of the biggest takeaways from my time with the Rams was how important the fan experience is. My roles with the organization were very client-facing and with it only being the second season of the Rams being back in Los Angeles, we were still trying to create an experience. My internship focused on making each experience better than the one before.”

What is your favorite memory from you time with Michigan Water Polo?
“Senior Day. There was a moment at the end of the game where all the seniors came together in the middle of the pool and just hugged each other. It sounds so simple but after everything we had been through together over 4 years, it was pretty special to have that moment together.”

How much are you following March Madness?
“My bracket was busted like most people pretty early, but I’m following Michigan very closely. It’s a lot of fun watching your team do so well. GO BLUE!”