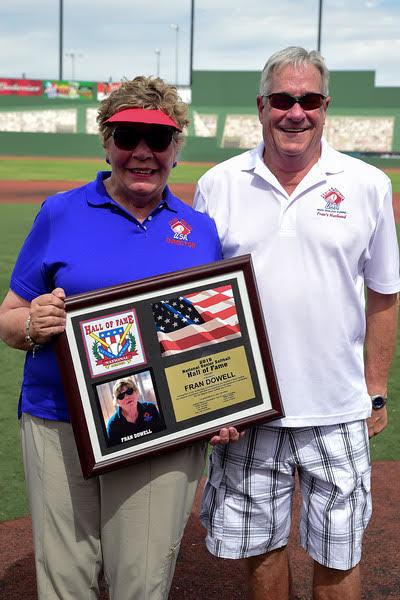 SACRAMENTO, Calif. – Fran (Jaksich) Dowell, a 1971 graduate of St. Francis, was inducted into the National Senior Softball Hall of Fame in Las Vegas on September 28. Her election was in her first year of eligibility and was in the category of “Director”. Fran is a former recipient of the prestigious SFHS Lifetime Achievement Award for her career in Senior Softball.

“I am very honored to be elected into the 2015 Hall of Fame,” said Dowell. “I have always thought of myself as the luckiest girl in the world to have so many wonderful friends in Senior Softball.”

For the past decade Fran has guided the largest senior tournaments in the sport, including the World Master Championships, which drew over 500 teams to Las Vegas last year. In addition she has increased the number of cities in which SSUSA hosts tournaments from 35 in 2005 to 70 in 2015.

In an interesting coincidence, Fran was inducted to the Hall of Fame by Terry Hennessy, the C.E.O. of Sacramento based Senior Softball USA, who is the father of SFHS graduate Jayme Hennessy (Class of 2001).

“Fran has been an instrumental leader behind the continued strong growth of Senior Softball USA and, even more importantly, has become the heart and soul of the organization,” said Hennessy.

Involved in Senior Softball since 1998, Fran became the first female Executive Director of a major softball organization in 2006. Fran previously served as SSUSA’s National Tournament Director and Marketing Director. In both 2009 and 2012, Fran also received the National Award of Excellence from Sports Events Magazine as one of the top 12 sports promoters in America.

Founded in 1988, Sacramento-based SSUSA is now the largest softball association offering senior softball programs. There are an estimated 1.5 million softball players over 45 in the United States. Of those 1.5 million players, about 30,000 registered players compete at the national level in SSUSA. Each year, SSUSA tournaments bring in more than $165 million in economic impact for their host cities through its 70 National tournaments. In addition, SSUSA publishes the quarterly newspaper, Senior Softball News, the sport’s rulebook and holds international tournaments.