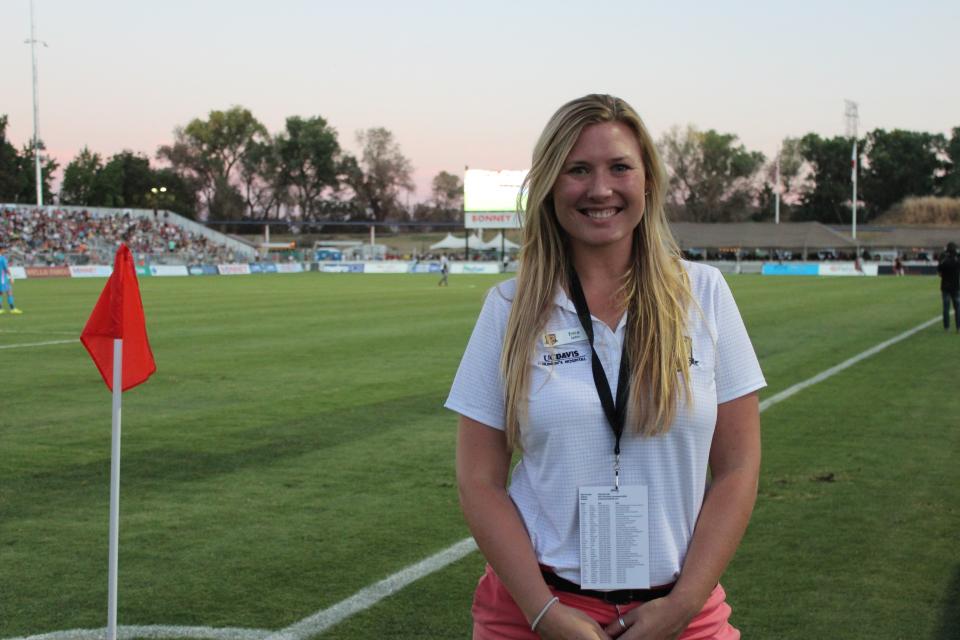 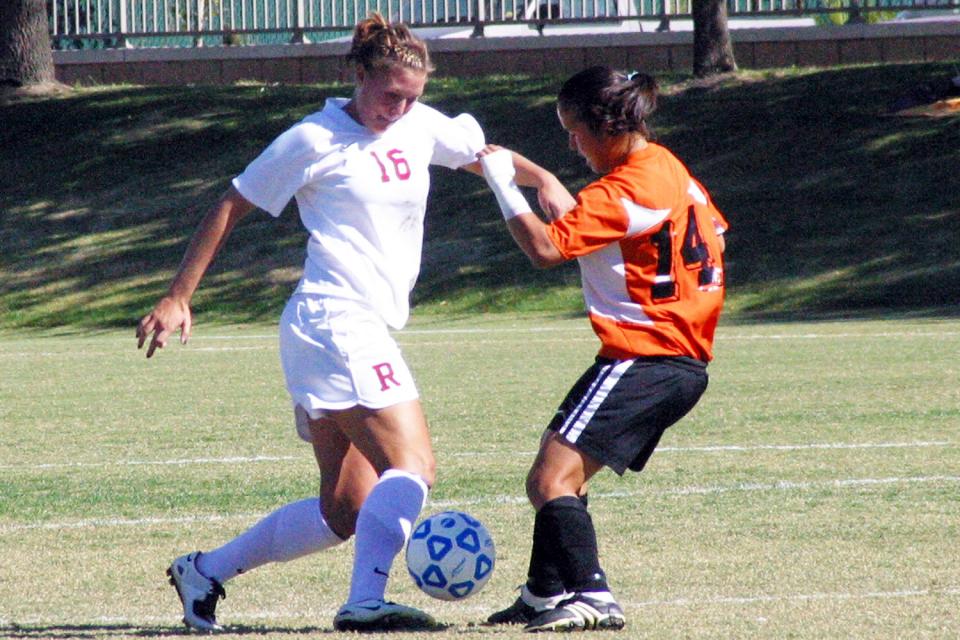 SACRAMENTO, Calif. – St. Francis alumna Erica Jahn does not suit up for Sacramento Republic FC but she has played a big role in their inaugural season. In her first season as an account executive, Jahn has helped the team post attendance records all season.

“It has been great,” said Jahn, who is a 2005 graduate of St. Francis. “It is not your typical (situation) working for a professional team. It is a startup business more than anything. It is easy because I get to talk about soccer which I have spent whole life being a part of and trying to build up Sacramento, a town I absolutely love. It was an easy decision to come home.”

“My favorite season was my sophomore year,” said Jahn of the 2003 season. “We had a bunch of players that were really advanced in ODP and decided not to play. We were not really expected to be as good. We were able to go win the whole thing and exceed everyone’s expectations. It was really fun.”

Following high school, she attended the University of Redlands where she ranks seventh all-time in career goals with 18. She scored 45 points in her career to sit eighth all-time and was one of just 15 Bulldog women’s soccer players to join the 10-5 club (10 goals and 5 assists) with 18 goals and nine assists in her career.

“It was a fun transition,” said Jahn, who was a midfielder for the Troubadours but moved to center forward in college. “I got to score some goals.”

A double major in business and history, she decided to study physical therapy after graduation and did four more years of undergraduate work while managing a gym in Davis. Then the Sacramento Republic FC started and she sought out a position with the organization. She has been going non-stop ever since.

“We have had several “Oh My” moments,” said Jahn, who handles season and group ticket sales with strong customer service element. “We never expected to sell out a 20,000 seat stadium but we did it three times.”

Jahn recently organized Sacramento Soccer Day as part of a game at Bonney Field. The club recognized championship teams and clubs across the region including the section-winning St. Francis team.

“Planning Sac Soccer Day was great,” said Jahn during a quick break at a recent game. “I was heavily involved in this Sac Soccer Day because I work primarily with all the youth soccer organizations along with Sean Morrison, who is a Jesuit alum. We work closely with the DOC’s and club presidents to get the youth teams out here whether it be though season tickets with the families or the club that the teams can use on an individual game basis. It really developed a really nice partnership with those clubs.”

Sacramento Republic FC has had several highlights on and off the field this season. Jahn lists the opening game at Hughes Stadium among her favorite moments, as well as her brother, Adam, scoring the first goal that night.

On loan from the San Jose Earthquakes, Adam joined Erica in a nice brother-sister duo helping the club this season.

“I love having my brother home,” said Jahn. “We have always been close. I recently bought a house so he has been able to live with me while he is here. His rent is he cooks. He has a lot of down time and he loves cooking and he cooks really healthy.”

The team moved to Bonney Field at Cal Expo midseason and has continued setting attendance records. They recently broke the league season mark with five regular season games remaining, selling out each game during the home stand during the California State Fair.

Jahn is proud of the efforts of the team and staff. Opening the new stadium was a chore without its challenges but it has proved successful.

“It was a marathon,” said Jahn. “We were doing everything from laying seats to get screwed in to sweeping. When you start a business, there is no little job. Everyone is all hands on deck and you get it done. It has been one long learning experience.”

Jahn feels the future is bright for the club in Sacramento.

“This is town is ready for a professional team,” said Jahn, who grew up in Davis and attended St. James Elementary school. “There are so many great youth players. To have something accessible on a regular basis and see what is available for the next level is great.

The sport is really growing across the country and I am really hoping we can build something over the next 15-20 years into something similar to the intricacy of the European-style leagues.”

Jahn looks back on her St. Francis experience as a major foundation in her success.

“I always wanted to go to St. Francis,” recalls Jahn. “I went to St. James. It was never really a question. I did choir and was able to take art classes which I really liked. The athletics are unparalleled. It is a family. It is not teaching a subject but teaching a person. I am not Catholic but I think that religious education is extremely important as well in understanding society. It is such a foundation of Western culture. It is the best experience ever and no one needs boys at school.”