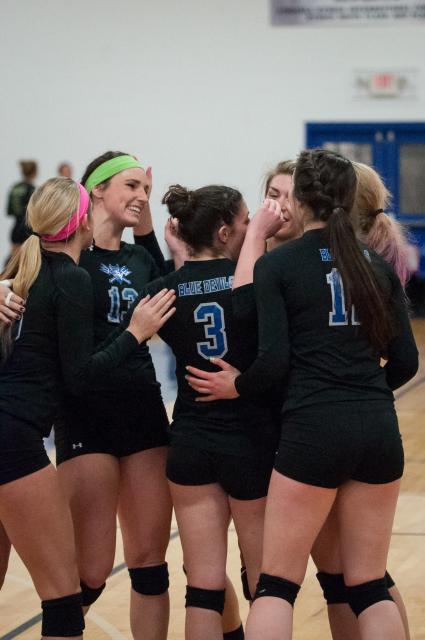 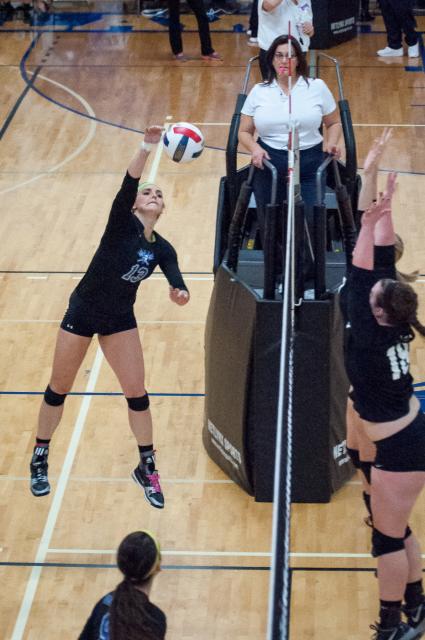 SOUTHFIELD, Mich. – Former Troubadour volleyball player Kasey Clark went back to serve like she has done a thousand times. But something was different. When she turned around, she was mobbed by her teammates.

“I went back to serve and all my teammates started running up to me,” said Clark, who is a senior at Lawrence Tech in Southfield, Mich. “I had no idea what was going on.”

Little did she know, Clark, who admittedly pays attention to her stats but nothing more than game-by-game totals, had just recorded her 1000th career kill for the Blue Devils. She was the first player in school history to reach the mark.

“They were hugging me,” recalled Clark. “I almost started crying. It was a cool day because it was my last home game. I think I will always remember how I felt in that moment.”

It was one of several milestones she has set this season, putting a cap on a successful and memorable career. The school has highlighted her accomplishments with a splash page that is viewed by every person who views the school’s athletic website.

“Kasey is a phenomenal player, one of the best I’ve ever coached,” said Lawrence Tech Head Coach Larry Wyatt. “There really isn’t a weakness to her game. Every match the opponent knew what she was going to do, yet she scored all season long. It was really fun to watch her take over matches this year.”

Clark, who is a 2010 graduate of St. Francis, recently was named to her second All-Conference First Team. The standout senior became the first-ever Lawrence Tech athlete to be named to multiple first teams. Clark finished just behind Davenport University’s Hannah Stone for WHAC Player of the Year.

“I was really excited,” said Clark about the all-conference recognition. “I did not even know until our SID Brad Beyer posted it on Facebook. It was cool to see it more than hear about it. I am proud of it. But it is definitely not just me. My team helped me with everything and kept me going at the end. I could not have done it without my team and coach for sure.”

So how did a California girl end up in Michigan?

“It was a big change moving here,” said Clark, who is majoring in business administration with concentration on human resources and hopes to graduate next winter. “I was used to the snow before from going to Tahoe to snowboard and stuff. But living in it is way different that driving in it. I don’t mind it. I wanted to leave California anyway so I was expecting whatever I was I got myself into was going to be different. I like how Michigan has four seasons and it is not just rain and sunshine.”

Clark is in her third season competing for the Blue Devils but did not find her spot right away out of St. Francis. She originally signed with Oakland University after high school and then spent a year at Oakland Community College, where she helped the team to a 41-4 record. But she has found her home now.

“I kinda bounced around a lot but I ended up at Lawrence Tech,” said Clark, who will serve a graduate assistant next year. “I like it a lot here. It is a good school and I am getting a great education.”

Clark also collected two WHAC Player of the Week awards and two All-Tournament selections in route to the First Team nod. She finished the season with 672 kills, ranking her second in the nation and first in the conference for total kills. The outside hitter also ranks first in the conference for total points (745) and points per game (5.53). She wrapped up the year recording double-digit kills in 34-of-38 matches, including 19 double-doubles.

“I got to play the whole time,” said Clark of her senior season. “I had so much fun playing and breaking records. We had two other seniors and one that I played at Oakland CC with so it was bittersweet the last game we had together. It was a good weekend we ended on. We beat a team we had not beaten before. I do not have any bad memories and everything I remember and look back on for volleyball has been rewarding. I am proud to be here and of everything I have accomplished.”

Clark has fond memories of her time with St. Francis.

“Homecoming and volleyball will be the two things I remember because they were always so exciting,” said Clark.

Clark finished the season with two major marks among the NAIA national statistical leaders, ranking second in kills and kills per game. They are stats that will likely help her earn All-America honors when the season is complete.

“I feel like I should be more emotional about that but I am still in shock when I my coach told me,” said Clark. “It is really cool. Anybody would think is cool.”