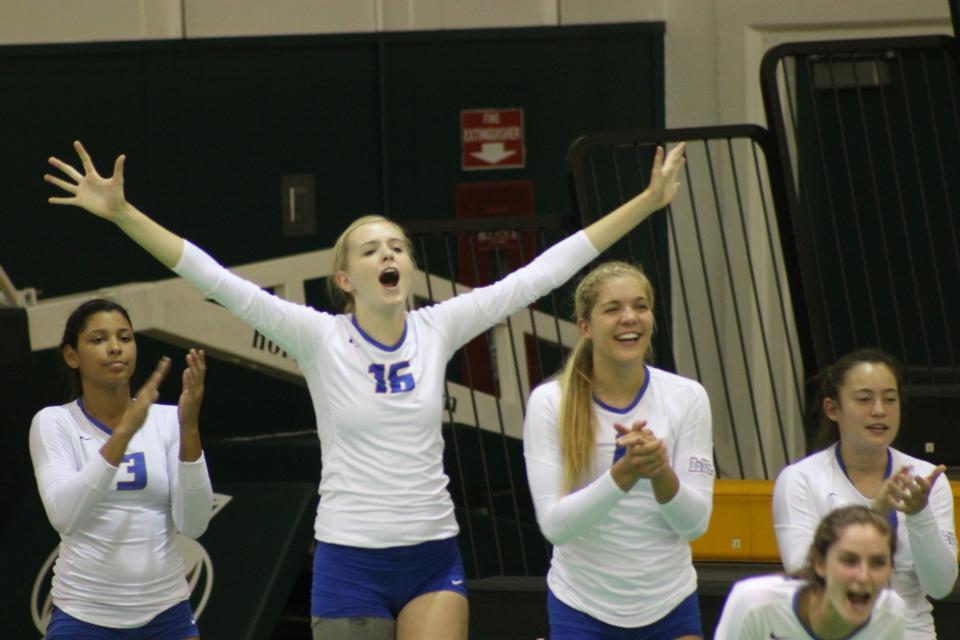 SACRAMENTO, Calif. – The drive down Elvas Avenue to St. Francis High School was very familiar but this time they kept driving by their former school en route to the gym at Sacramento State.

“On the bus I was really excited,” said UCSB freshman Megan Sullivan about driving by the school. “I was (telling everyone) that was my high school and pointing out where we go to eat all the time after school. No one really cared but Noa and I were really excited and took videos and everything.”

Sullivan and Noa Nightingale returned to Sacramento this weekend with their new Gaucho volleyball teammates for a two-day tournament at Sacramento State that started Friday afternoon.

“It is crazy,” said Nightingale, who had 197 kills as a senior. “It is so much fun. I love the team. It is really busy and I am working harder than I have ever worked. But it definitely pays off in games.”

The St. Francis duo opened their collegiate careers last weekend at a tournament at Colorado State. Following the Sacramento State tournament, they travel to Berkeley to play Nevada, Pacific and California next weekend.

“It is pretty fun,” said Sullivan, who is from Granite Bay. “It is a big adjustment getting to use to how much faster the game is. The girls on the team are really nice and are helping me adjust really well.”

With school not starting until Oct. 2, they are getting time to adjust to life as collegiate student-athletes.

“We just got done with double days and now we have four hour practices,” said Nightingale. “We start out at 10 in the morning and have video for an hour, then practice and weights. It is all volleyball but I love it.”

The team lost to Loyola Marymount in their tournament opener Friday and has two more matches on Saturday against Fresno State and the Hornets. Nightingale made her first appearance in the third set against the Lions, garnering a loud applause from the local UCSB supporters that included several former teammates. Sullivan did not play due to an injury.

“It was so nice seeing the St. Francis girls come support,” said Nightingale. “It encourages us to keep working hard.”

Nightingale and Sullivan helped St. Francis to a Top 25 national ranking last year. They were part of two Delta River League championship teams and helped the Troubadours to a state runner-up finish as juniors. Sullivan was a Sacramento Bee All-Metro selection and led Division I right side hitters with a .353 hitting percentage.

“Noa has some all-around skills that can help impact our team as an outside or right side and Megan is a big blocker with size and that is an area that can help us down the road as well,” said UCSB Head Coach Nicole Lantagne Welch.

Nightingale plans on studying political science, while Sullivan will major in global and international studies.

The tournament continues Saturday for UC Santa Barbara with matches against Fresno State at 10 a.m. and Sacramento State on Saturday night at 7:30 p.m.

The St. Francis volleyball team has 18 alumnae currently playing on collegiate teams across the country. Portland’s Ali Koumelis will play Saturday in a tournament at UC Davis, which features Allie Wegener, a 2012 graduate on the Aggie team.