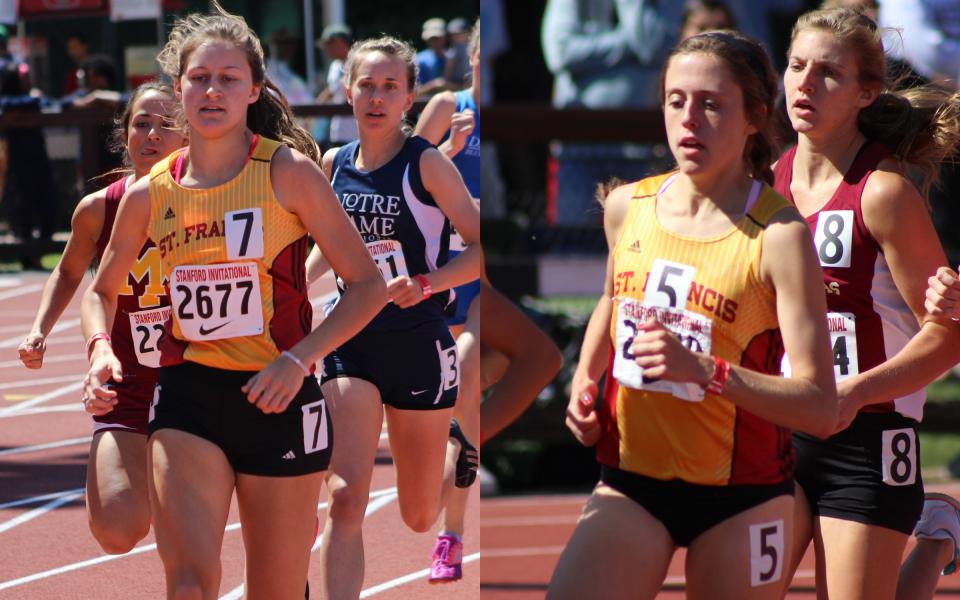 Junior Ariane Arndt recorded a personal-best for the second consecutive meet in the 800 meters, clocking a 68 second first lap and closing with a 65-second final lap. She closed strong, passing three runners over the final 100 meters, finishing second in a school record time of 2:13.71. She reset a mark set in 2003 by Ingrid Kantola (2:14.69).

“I was really nervous to run because I knew I could do better than 2:15 (her PR) and I wanted to PR really badly,” said Arndt. “I wanted to get out faster and run the same second lap to PR by a lot. I always wanted to get a record, something to put your name on. It means a lot.”

Senior Peyton Bilo, who also finished second in the 3200m on Friday, broke the mile mark set by former Troubie Madison Rawson at the same meet last year. She clocked a 5:02.21 to finish 11th in the mile.

“It was amazing and I think it was the first record I have set,” said Bilo. “I am super excited to leave a mark on St. Francis. Hopefully, I can chase a few more as the season goes on. I felt really strong today and was really excited to be out there. It was really fun. I had a great time.”

The St. Francis relays also had impressive days. The 4×400-meter relay consisting of Kiani Reyna, Arndt, Lilly Enes and Sydney Hunter were second in the final event of the day, posting a time o 3:59.00. The foursome also finished fourth in the 4×100-meter relay earlier in the day.

In action on Friday, sophomore Elizabeth Hennessy finished 10th in the 67.56 in the 400m hurdles and the distance medley relay placed 19th overall.