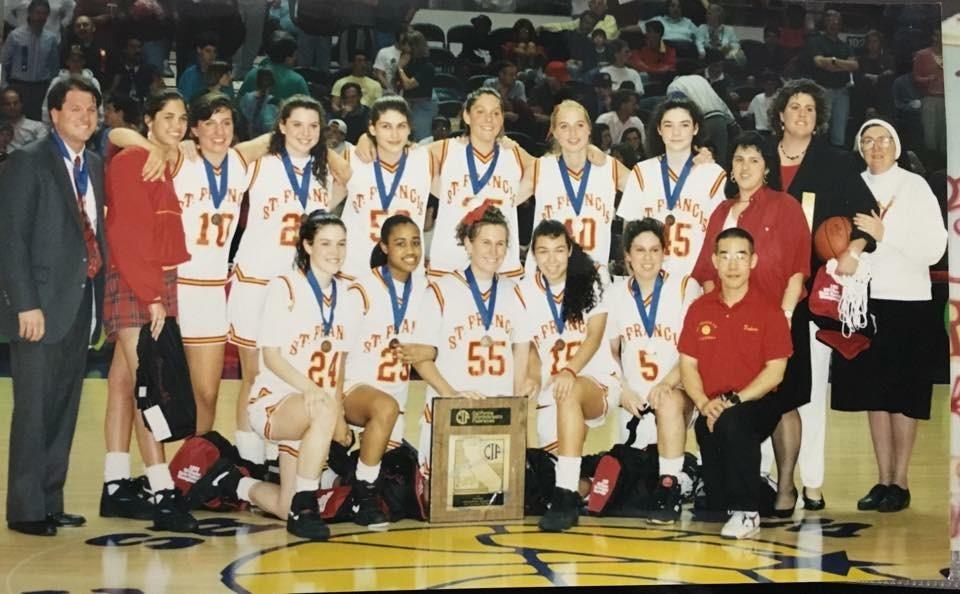 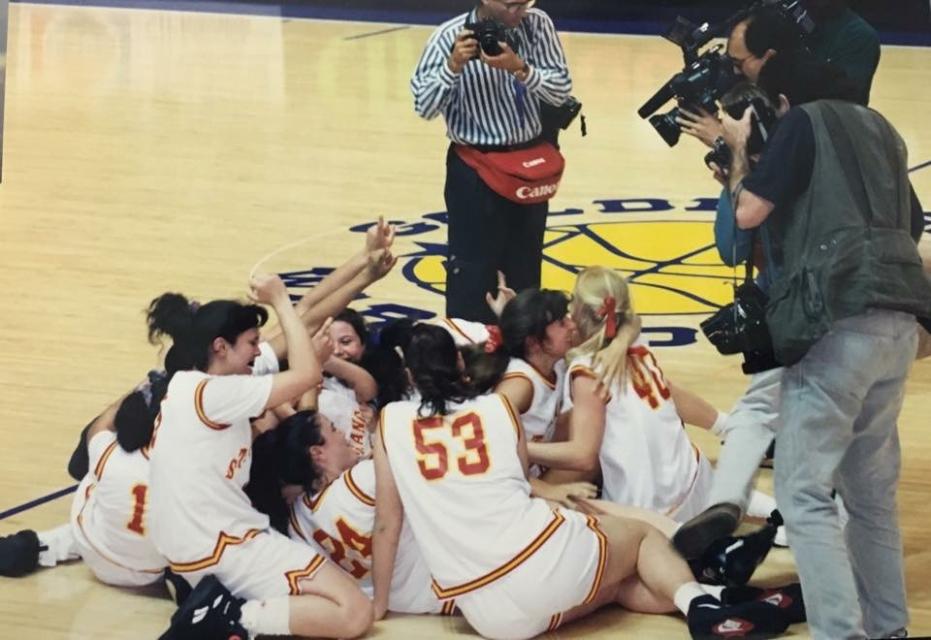 SACRAMENTO, Calif. – When the 2016 St. Francis basketball team qualified for the state championship game on Saturday, there was a group text started between 12 players. The achievement brought back memories and feelings for the only people in St. Francis school history who can relate: the 1993 state championship team.

“All of it is just is flooding back and it is so great,” said Camille Gutierrez, who was a senior captain. “To think these kids are now in the middle of it. It is hard to totally enjoy it. They still have one more thing to accomplish. When it is all over they can look back and look at what they did. I am so excited for them and I hope they can experience what the 12 of us and the coaching staff did.”

What they accomplished has never been done by another basketball team at the school. They posted a 50-43 win over Costa Mesa in front of more than 12,000 fans in the Oakland Coliseum to win the CIF Division III state title on March 20, 1993.

Four of the five starters on the team averaged double figures during the season. It was a balanced attack from an experienced group that had played a lot of basketball together.

“It was a really long time ago,” said Bagatelos. “There is very little I directly remember of the game or specifics of the times. What I do remember is the comradery. We had a really amazing team. We did not have a 30 point scorer but we had five starters that all put in 10 to 15 points a game to get those wins. We were a big defensive team.”

Gutierrez was one of the senior leaders who led by her example more than her words.

“Camille was always a stud,” said Bagetelos. “She was the one freshman who made the varsity. She was always one of the top players and go to players handling the ball and one of my best friends in high school. We were very close. I could not hope for a better point guard to go with my center position. It was great teamwork of our two skills sets.”

The team won the Metro League title, dropping only one game to El Camino in league play, and finished with a 27-5 overall record. They won the Sac-Joaquin section title, the school’s third in a row among four straight from 1991-94. But a state title was not expected.

“I just remember we had done well all season,” said Gutierrez. “I felt like we did not get a good seed going into NorCals. Everyone had us losing to Bishop O’Dowd in the first round because of our seed. We beat Bishop O’Dowd running one play. It was a pick-and-roll. If they stayed one me, I would kick it over to Mindy and she would score. If not I would kick it out somebody for a jump shot. We literally ran one play. I told Coach Parsh we can call it different names but if we kept calling “Red” they were going to figure it out. That game everyone had us out. Kim and Chris each had a steal and from there it was lights out.”

After winning the NorCal Division III title, the Troubadours found themselves in the state title game with Costa Mesa in the Oakland Coliseum. Whalen locked down leading scorer Olivia DiCamilli, holding her to eight points, 12 below her season average.

St. Francis led early (11-9) and took a 31-19 lead into the locker room. But the Mustangs cut the lead to five with 4:26 left. But back-to-back steals by Gutierrez and Whalen sealed the game.

“Ever been to the Grand Canyon?…They were huge,” said Head Coach Dave Parsh about the two steals to the Los Angeles Times.

“When we won, it was a pretty close game, and we were so close and had played together so long, we were all in a pile on the ground,” recalled Bagatelos. “We were so excited and just melted into a giant puddle. It was great to see the evolution as we matured into women and conclude those years in that way.”

The team credits former coach Jerry Poole with setting the stage for the title and Parsh, who now is coach and athletic director at Kennedy High School,  with the execution of the successful season.

“Jerry Poole was great and laid the foundation,” said Selena Srabian. “Dave came in and was very organized. We ran a lot of drills and practice was hard. He brought this new fresh way which made us so successful.”

While the entire roster has been energized by the state run, Bagatelos has been following the current team with more interest as her niece is a freshman on the team, NIka.

“The poor thing has grown up loving basketball and hearing about me play and now she is about to meet one of my greatest milestones in sports in her freshmen year,” said Bagatelos. “I am super proud of her. She got moved up from JV to varsity and she has been working so hard at becoming a killer basketball player. I am proud to see her do it.”

Several players still live in Sacramento and the surrounding area and will meet at the game on Thursday.

“We have been nothing but cheering them on and it will be great to have another team in basketball join us,” said Gutierrez. “Everyone is happy and hopeful they join the club.”

Thanks to Selena Srabian for the photos.